One of the biggest technological improvements made to computers in the 90s was the introduction of the CD-ROM. Their superior storage capacity enabled the introduction of CD quality music, audio and video in videogames. It also began the popularity of FMV (Full Motion Video) games, which featured for the 1st time, actual videos with actual actors in it. And although 3D graphics were introduced a few years later, voice-over acting is still a predominant part of videogames nowadays.

That’s why today’s review is dedicated to one the first FMV and CD-ROM games and perhaps the one that popularized the use of CD-ROMs as a viable media for videogames. I’m talking of course about The 7th Guest!

The 7th Guest was produced by Trilobyte and distributed by Virgin. It was released originally in 1993 for DOS and CD-i, re-released a year later for the Macintosh, in 1995 for PC-Windows and in 2010 for the iOS and recently remastered for Android.

But let’s start by taking a look at the cover:

This cover simply screams classic horror! It looks like the poster of any horror book or movie featuring a haunted house. And the title’s lettering reinforces it.

And the Windows 95 cover isn’t too shabby either:

But let’s boot this sucker and prepare to shake in our boots:

The intro, as you can see, is shown as a FMV cutscene, introducing the mansion’s owner, Henry Stauf (the last name, it’s an obvious anagram for Faust) and his story from homeless man to successful toymaker through mysterious means. One night, he invites 6 distinguished guests for a night of games and puzzles, but they were never seen again along with Stauf himself.

All the guests are introduced afterwards as ghosts, each with their own musical themes, which are played every time they’re on screen or referenced. You never actually interact with any of the ghosts; they’re simply replaying the events of that night, as in stuck in a ghostly loop.

Why must all scary mansions have a huge staircase?

You play as Ego, as named in the manual, who suffers from amnesia and is stuck in the mansion and has no other choice but to play and solve Stauf’s puzzles.

Every room in the mansion has a puzzle waiting to be solved, but at the beginning only the library is accessible. You have to solve puzzles to open up other rooms with their own puzzles to solve to open up more rooms until the final room and the final puzzle. Every time you enter a new room, you can watch a ghost cutscene and you’re also rewarded with another ghost cutscene almost every time you solve a puzzle.

The objective of the game is to solve all the puzzles, watch all the cutscenes and find out what happened to all the guests, especially the eponymous and elusive 7th “guest”.

“I say! This rude message is making me quite transparent.”

The ghost cutscenes are played in a hilariously over the top way and although the video quality isn’t the best, you won’t have any difficulty to make out what’s happening.

The characters are all quite colorful, if a bit stereotypical. But then again the focus of the story is Stauf himself, so naturally he’s the character that gets more characterisation.

The logic puzzles in their majority aren’t too hard, although you’ll end up cursing some of them, like the can and the microscope puzzles. The microscope puzzle became so hated by the players that it was cut out from the iOS version and released as a standalone game (The 7th Guest: Infection). 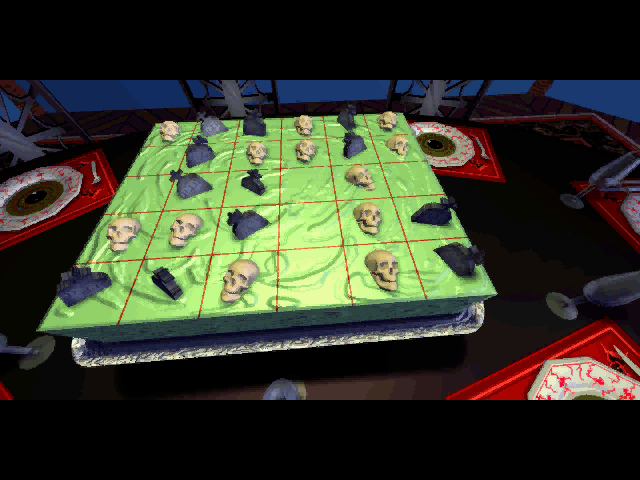 Now, this cake I wish it was a lie!

Both Stauf and Ego will give hints to solve the puzzles and if you still need help, you can go back to the library and use the book in which you saw the intro. The 1st time you use the book it’ll give you a hint and transport you back to the puzzle. The 2nd time, it’ll explain the puzzle’s mechanics and the 3rd time; it’ll solve the puzzle for you. But you might miss the ghost cutscene that usually plays after each puzzle is solved. You can use the book for every puzzle except for the last one.

And because you can tackle the available puzzles at any order, the ghost cutscenes might appear out of order, but it shouldn’t be too hard to understand the entire storyline.

The graphics are all in SVGA, presented in pre-rendered stills. This means that all movement isn’t as free as in a 3D game, but it’s also pre-rendered in a first-person perspective. It looks amazing for the time and the transitions are all well-animated. The shadows and lighting give an eerie atmosphere suitable to a horror-themed game as this.

Good thing you can access this map in the options screen.

And speaking of atmosphere, the music is top-notch. All themes were composed by George “The Fat Man” Sanger (a famous videogame music composer) and they’re all fantastic and contribute even further to the game’s atmosphere. And if you have the game in physical format, just put the 2nd cd in your cd-player and you can hear the amazing soundtrack.

The menu screen is an Ouija board, in which you save or load games, return to the game, restart it, quit to DOS, or look at the map. The map is another helpful tool, because not only it shows the layout of the mansion, but it also shows which rooms are open and which puzzles have already been solved (light brown for unsolved and red for solved).

All the action is controlled by the mouse and the cursor in-game changes accordingly to its function: a skeletal hand for navigation, a skull with a brain for puzzles, a drama mask for ghost cutscenes, a pyramid to access the menu and rattling teeth for weird and supposedly scary short scenes or to open and use the several secret passages located throughout the mansion.

The secret passages are a very convenient way to travel around the mansion faster and sometimes the way you use them should give you a hint about Ego himself.

But for me the game has one small flaw and I have to go to spoiler territory to explain it:

I found the ending small and a bit confusing. I had to replay it a couple of times in order to understand it a bit better. Supposedly there was going to be a bad ending if you used the library book too many times or used it on the last puzzle, in which you’d return to the very beginning of the game, evoking the loop in which all the ghosts are trapped. But it was cut from the final product.

And I still to this day I ask about the connection between Ego and Tad and what really happened to them and Stauf at the end.

But apart from this small flaw, which is due more nitpicking than anything else, I still find the game quite enjoyable and I highly recommend it.

Yes, it’s a collection of several logic puzzles, but they’re presented in such an original way, with a great atmosphere, featuring a great soundtrack and all-encompassing in a classic horror style, that it’s impossible not to enjoy it.

I’ve heard about touching art but this is ridiculous!

In 2019, a remastered 25th anniversary version was released bundled with the original version (as free DLC) on Steam, GOG and Android.

And if you’re playing the original version on ScummVM, then try this remixed high-quality soundtrack!

The 7th Guest sold more than two million copies, which began the FMV craze and cemented its place in computer game history. Its sequel, The 11th Hour, didn’t have the same success.

Although there aren’t any remakes (only remasters), I wouldn’t mind seeing a full 3D remake, but still with the same hammy acting, better graphics and perhaps an expanded story and new puzzles to be solved.

So, that was my review of The 7th Guest. Did you like it? Write your comments below and tell me about it.

I’m preparing a very special surprise for February, so I’ll take a couple of weeks to prepare it. Come back just before February for me to introduce it and until then keep on playing.