Like I said before, we’ll continue our Sierra retrospective by going to SPAAAAAACE! More specifically, Space Quest I.

Space Quest: Chapter I – The Sarien Encounter was originally released in 1986 for the Apple II, DOS and Atari ST and a year later for Amiga, Apple IIgs, Macintosh and re-released for DOS.

After the success of King’s Quest I, other game designers at Sierra started to play around with the AGI engine and two of them, Mark Crowe and Scott Murphy (you know, those Two Guys From Andromeda) designed a sci-fi comedy featuring a janitor as the protagonist. But in space.

This prompted at least 3 different covers:

Somehow, I don’t think this book will recommend the use of towels.

While I do like the title lettering, the rest of this cover is very unimaginative. It looks more like a manual cover than box art. Also, “3-D animated”? I know this wasn’t the first or the last game at the time to claim it, but I wouldn’t call the ability to walk in front and behind background objects, exactly “3D”.

But the 2nd cover is sort of an improvement: 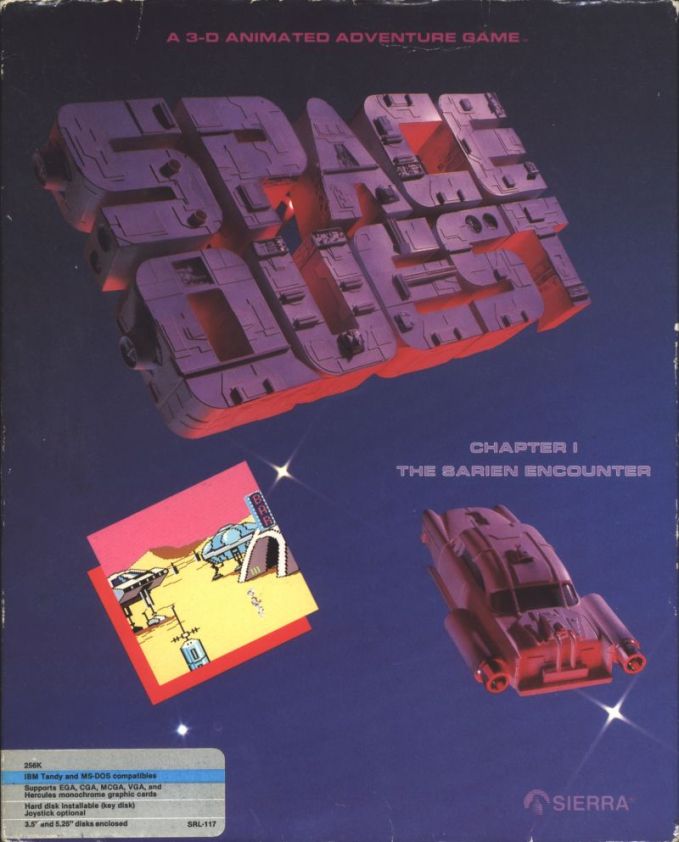 Is that a space cab?

Again, I like the title and the space car, but the background is just empty. Three flare effects imitating stars doesn’t exactly screams “SPAAAAAAACE”. And adding a screenshot at random doesn’t help either.

Yes, much better. Although that space car doesn’t appear in the game, this looks like a proper sci-fi cover.

But enough stargazing and time to boot this bantha:

As seen above, in a galaxy … several light-years away, Xenon’s sun is slowly dying, so a Star Generator is created to revive it. You play as a janitor employed on the starlab Arcadia, where the Star Generator is being transported back to Xenon. But a group of evil aliens called the Sariens board the ship, kill the crew and steal the Generator to use it as a weapon. You escape the massacre because you were sleeping inside the store closet. Your mission is to escape Arcadia safely, find where the Sariens are hiding and stop their evil plans.

You can even name your character and if you leave it blank, your character’s default name is Roger Wilco (which later became the protagonist’s canon name).

“Hey! Why is everyone taking a nap?”

Space Quest I is more linear compared with King’s Quest I and just as hard (the first 2 locations are infamously difficult). But one can say is no more difficult than any other Sierra AGI adventure title at the time, but then again the real gem here is the humor. And it’s quite funny, especially the death animations. Don’t forget to save before trying one!

The game is littered with several references to classic titles, sci-fi and otherwise. But again, the music is almost non-existent and the title theme is a bit grating on a PC speaker. And also, regarding this, the Apple IIgs version wins over all other versions.

Well, it’s no cantina, but at least the band are on a mission from God.

There’s even a small arcade sequence that appears unexpectedly and it’s quite hard to master. I recommend reducing the game’s speed in order to make it easier.

The game isn’t too big, but still a solid experience. Like I said before, the first 2 locations are hard because you need to be always on the move and there are several traps and dangers to avoid, which are harder than the puzzles themselves. But it’s the slot machine located in the Ulence Flats bar that takes the cake. If you run out of credits or get 3 skulls, it’s game over! But despite that, Ulence Flats (the 3rd location in the game) is still my favorite part of the entire game because is full of funny references to movies and other sci-fi properties. 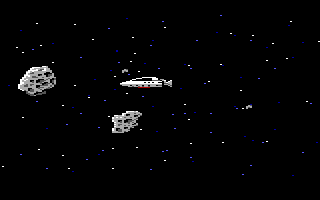 In space, no one can hear you get sick.

And like other Sierra titles, this one was also remade using the SCI1 engine.

Renamed Space Quest I: Roger Wilco and the Sarien Encounter, it was released in 1991 for DOS, Amiga and Tandy and a year later for Macintosh.

And check out this cover:

Instead of focusing on the sci-fi imagery like the original covers, this one focus more on the comedy elements with 3 (presumably drunk) aliens partying with poor Roger.

It isn’t just the audio, the animation and the music that has been improved, the art style and the new visual gags are more than welcoming sights. Almost everything is improved in the remake. There’s even more references included.

The new gags are funnier than ever, including a sports-type replay commentary from the Two Guys from Andromeda on some of Roger’s deaths. 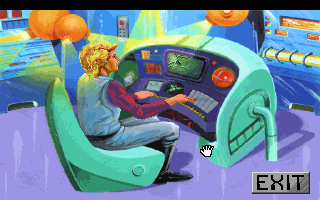 Have you try to turn in off and on again?

The new art style is based on 50s sci-fi b-movies (commonly known as retro-futuristic), bringing a new visual presentation to the game fitting the comedy. Especially inside the Sarien ship!

While the game makes some parts easier in comparison with the original (like the slot machine and the arcade sequence), other parts have become harder (like avoiding the Sariens on board of the Arcadia).

But not only I strongly recommend this game, I also recommend the remake over the original version. 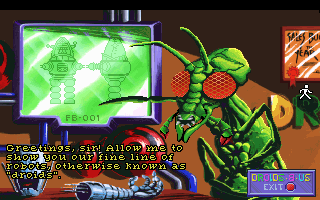 “Yes, I recommend this model in case you ever get lost out there, you know, in space”

You can buy the original version here on GOG.com along with 2 and 3, or you can buy the entire series (including the remake) here on Steam.

We’re now halfway through our retrospective and how are you enjoying it so far? Leave your comments below. Next week, not only are we back on Earth but we’re going to take it to the streets. Till then, keep on playing.