Hero’s Quest: So You Want to Be a Hero is an RPG/graphic adventure originally released in 1989 for DOS, a year later for Atari ST and Amiga and in 1991 for the PC-98.

Corey and Lori Ann Cole were 2 designers at Sierra who are avid D&D fans and one day, they pitched the idea to the Williams of creating an RPG game using the SCI0 engine. But as development went on, they ended up creating a hybrid graphic adventure/RPG game.

But a year after the original release, Sierra was forced to change its name to Quest for Glory to avoid confusion with Milton Bradley’ board game Hero Quest (which was adapted into a different computer game that we’ll also review at a later date).

Quest for Glory I was supposed to have more RPG elements, like a deeper character creation with multiple races and also the ability to play as a female, but due to time constrictions and difficulties with the engine, these options were unfortunately cut.

But let’s look at the cover, shall we? 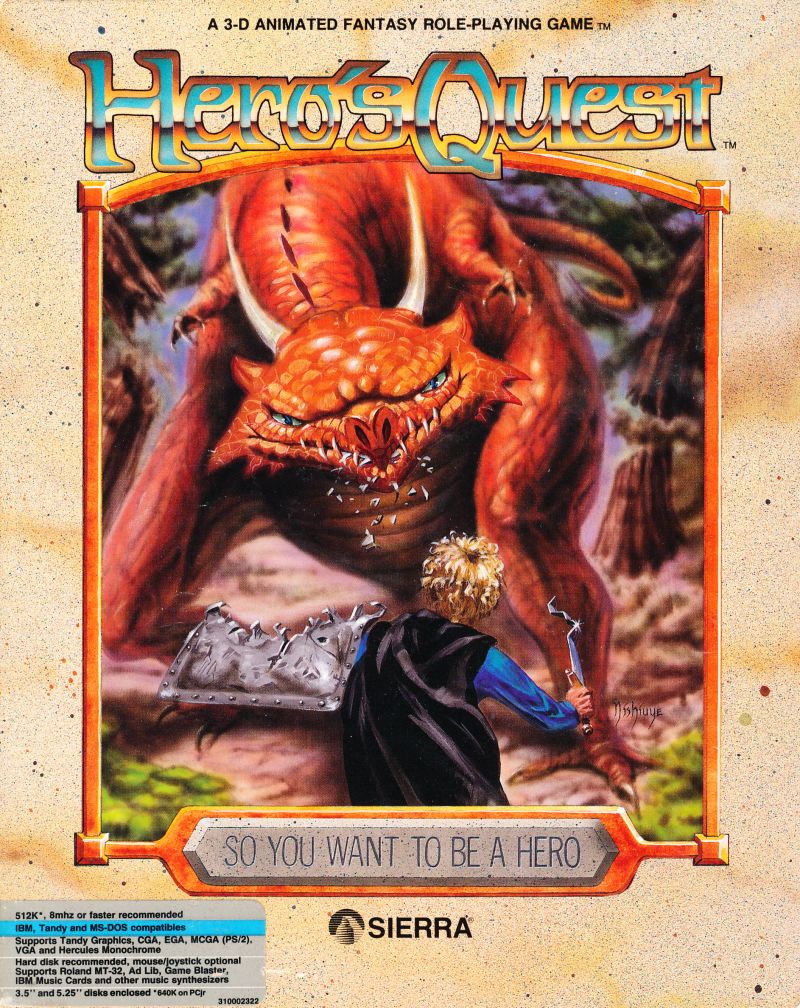 Talk about a diet rich in iron!

The cover shows our hero-to-be fighting a Saurus Rex, one of the hardest monsters in the game. It’s a good cover with decent artwork and conveys exactly the tone of the game.

But let’s boot this sucker, shall we?

Despite the intro showing a dragon, unfortunately you won’t find any (living) dragons in the game. You’d have to wait further along down the series for that.

The game doesn’t have a lot of backstory: you’re just a recent graduate from the Famous Adventurer’s Correspondence School, recently arrived to the valley and town of Spielburg, who are in dire need of a hero.

The game starts with the character creation, first by choosing a class (Fighter, Magic User or Thief) and then relocating your points to your preferred stats and finally naming him. The character’s appearance, however, is always the same.

The Fighter is an expert in combat and the most direct in his approach towards the puzzles and quests. The Magic User cast spells which you’ll have to look for, learn and use them to solve the puzzles and the Thief has to use his abilities to solve said puzzles. Take a locked door for example: the Fighter would simply smash the door open while the Magic User would cast a spell to open the door and the Thief would simply pick the door’s lock. Because of the latter, the Thief class is my personal favourite due to its gameplay being closer to a traditional graphic adventure.

While it is possible to create hybrid characters by allocating points in different stats (like giving the Fighter the ability to cast spells, for example), the game will always treat you as the class you’ve chosen. Returning to the previous example, while you can still use a spell as a Fighter to open the  locked door, you won’t get the points the Fighter would usually get for smashing said door open.

“Welcome to Spielburg. Don’t mind the goon with the yo-yo”

And these aren’t the only RPG elements in the game. Your character won’t level up like in most RPGs, instead you raise your stats by repeating the same action several times over. Fighting with your weapon raises your Strength and Weapon Use stats, throwing a dagger raises your Throwing and Weapon Use stats or casting a spell raises your Intelligence, Magic and that specific Spell proficiency stats and so on and so forth. You can raise your stats to a maximum of 100 points for each (with some exceptions, like Experience).

You also have Health and Stamina points that when depleted, it’s game over. These are linked to your Strength, Vitality and Agility stats and when these stats are increased, so are your maximum Health and Stamina. Magic Users also have Mana points linked to your Intelligence and Magic stats, although if depleted, you’ll just lose the ability to cast spells until your Mana is replenished.

No, you can’t turn enemies into frogs, unfortunately

To avoid your Health, Stamina and Mana to drop drastically, you need to eat and sleep, so you’re always in need of a steady supply of food and potions. While there is a specific place in the game where you can get free food and rest, potions aren’t free and you need money to buy them, therefore you need to solve quests and kill monsters in order to make money (although the Thief has another obvious alternative).

Also you can’t just sleep anywhere. There are a few safe spots to do it, like the inn or the castle stable for beginners, although there are also a few other safe spots in the surrounding forest for you to find.

The game also has a day/night cycle in which some places (like the town and castle grounds) are closed and inactive during the night, while other places become active and vice-versa.

Where’s Thor when you need him?

Another RPG element in the game is the ability to export your character to the next game of the series, maintaining all the stats, money and items you’ve collected so far.

You begin your game in the town of Spielburg, but shortly after, you need to explore the entire valley. The map is somewhat reminiscent of the one found in King’s Quest I (with the exception that it doesn’t revolve around itself) and you are free to travel anywhere inside said valley. This gives the game a non-linear aspect also reminiscent of King’s Quest I.

All the monster encounters (except in specific screens and locations) are random, and during the day, you’ll find the easiest ones to fight. The hardest ones come out at night, so be careful if you find yourself at night in the middle of the forest. But the majority of the night monsters start also appearing during the day after achieving 1000 points of experience.

Not as easy as it looks and it doesn’t look easy!

All the fights are shown in an over-the-shoulder POV and are fought using the keypad arrows. The controls are tight and easy to master. You can even run away from a battle  if you choose so (except for story-driven battles).

But my favorite part of the game are the NPCs, which are all well written and fleshed out. It’s impossible to hate them. Almost all the characters and by extend, the fantasy elements themselves, are based in Germanic folklore.

And while the game isn’t a parody, it still has a lot of comedy sprinkled out with lots of easter eggs. But the story isn’t afraid to get serious and somewhat dark when needed.

The game’s EGA graphics are very well detailed and colourful, with great animation throughout. The soundtrack is quite appropriate with certain main NPCs getting their own theme. The main title theme would later become the series’ main theme, with some  small differences in each entry.

Does anyone wants to play Ghosts and Goblins?

But unfortunately, the game also presents some flaws. Because of the repetitive nature while raising stats, some grinding is inevitable, forcing you to develop a daily routine for your character at the beginning before his stats are high enough to tackle the harder quests.

And while the Thief might be the hardest character to play in a graphic adventure perspective, the Magic User is the one that, for me, has the most grinding, due to the fact that you not only have to grind all the necessary stats linked to spell casting, but you also have to repeatedly cast all the spells in order to increase the proficiency of each individual spell.

But despite these little flaws, the game not only has great replay value, but also due to the grinding, a considerable gameplay length.

Then in 1992, to coincide with the rest of the VGA remakes Sierra was making, the Coles decided to remake Quest for Glory I using the SCI 1.1 engine, with VGA 256-color graphics and a point-and-click mouse interface.

And with it, also a new cover: 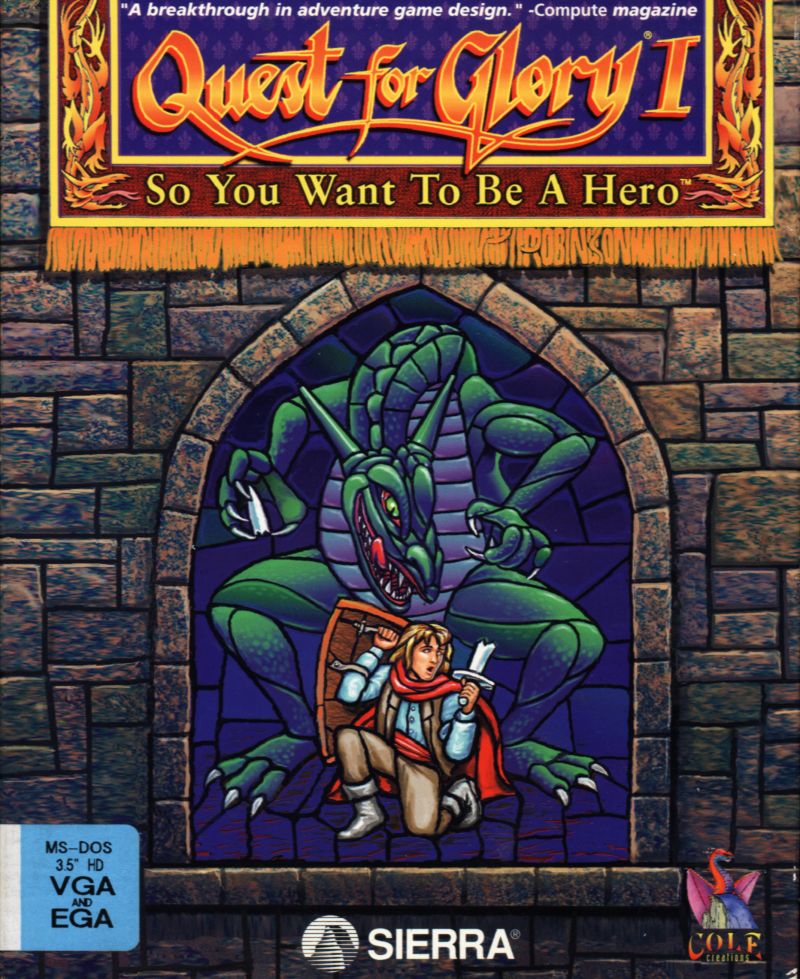 While I like the stained glass type artwork, I don’t like the image’s content, which shows the Hero facing a dragon and scared after said dragon broke his sword. We’ve already established that there aren’t any dragons in the game. So why depict a dragon instead of any other monster that’s actually in the game? Because of this detail, I think I prefer the original cover.

The intro’s a bit better, using clay models and stop motion animation, which was also used for the rest of the monsters and characters. But unfortunately, using said techniques made the animations look a little jerky sometimes, especially during the fights.

The remake not only has better graphics and resolution but the night/day cycle has been improved because this time, you can actually see getting gradually darker at sunset and gradually brighter at sunrise. However the remake uses a brownish colour palette, so even though it has 256 colors on screen, it looks less colourful than the original EGA graphics. There are even 1 or 2 locations that don’t look as detailed as in the original.

Because of the mouse interface, the dialogues now have a tree scheme, with topics to choose from a menu. This make the dialogues somewhat shorter, but more to the point.

The fights are now in a sort of isometric perspective, with icons in the corner for fighting, which makes the battles also easier.

The stats now rise faster, reducing the grinding and therefore the game’s length.

But story wise, the game remains the same. All the characters maintain their characterization and with the new graphics, they also sport new character portraits during the dialogues (except for the Hero).

Both versions had a tremendous success, with the original version selling over 250,000 copies shortly after its release.

So, which version do I recommend? Both, actually! It depends on your personal preferences: if you prefer a more colourful game and don’t mind the text parser, then go for the original. However, if you prefer an easier experience, the mouse interface and a better resolution, then go for the remake. But whichever version you play, I highly recommend this game as an entry point for the RPG genre, due to its intuitive and easy gameplay. And I also highly recommend the rest of series BTW.

Quest For Glory I’s (and consequently, the rest of the series’) influence was extremely important and it’s still observed nowadays because not only it popularised the mix of genres in future video games, but it also encouraged the use of RPG elements in other genres and the use of action-adventure elements in RPGs. You can buy both versions (along with the entire series) here at GOG.com or here at Steam.

And so this ends our Sierra retrospective. Did you like it? If so, leave your comments below and tell me which are your favorite Sierra games and moments. And while you’re at it, tell me if you’d like to see more Sierra games reviews or other retrospectives.

Join us again in March, where we’ll take a respite from graphic adventures and go back to our regular reviews. Till then, keep on playing.