When designing a game heavily based on a classic title and it doesn’t have its own proper identity, it runs the risk of being considered a clone or a rip-off. Today, we’ll take a look at one such game and decide if it’s a rip-off or not. I’m talking about Low Blow.

Low Blow is a boxing game developed by Synergistic Software and published in 1990 by Electronic Arts (before they became the Eldritch Abomination we know nowadays) for DOS.

And we’ll begin by looking at the cover:

I don’t mind using photos in covers as long it looks good and conveys the proper idea of what the game is all about. And in this particular case, it does! How? Well, a boxer being hit below the belt on the cover of a boxing game conveys the notion that this is not an ordinary boxing title.

Here, take a look for yourself:

The title screen is just a cartoon version of the box cover, reinforcing the idea of a humoristic game and the title theme (composed by the legendary Rob Hubbard) is quite good.

The menu screen shows our 2 selectable boxers: Frankie (with the white shorts) and Hollywood (with the red shorts). Think of them as the Ken and Ryu of boxing games! You can either play against a friend 1-on-1 or choose either Frankie or Hollywood and challenge 7 other boxers for the World Championship belt.

Something tells me he isn’t talking about hygiene.

The AI boxers are all cartoonish versions of famous boxers and each one harder than the former. But before each match, you can see your opponents’ stats and profile and you’ll also have the choice to train, where you’ll learn the necessary combination to defeat your opponent.

All matches occur in the same boxing arena, called the EA Palace. The game’s EGA graphics are quite colourful and all the characters, including the boxers, the announcer, the referee and even the audience, are all well detailed.

Although the keyboard controls are quite responsive, I recommend the use of a gamepad. The controls are quite simple: the directional pad (or keypad) for movement and defence and two buttons for punching; one for jabs, the other for crosses and both simultaneously for uppercuts.

Is that Mikhail Gorbachev on the top right?

The game uses a third-person view but the controls feel kind of isometric. Still, they’re easy to learn and master. The hit detection, however, isn’t always perfect, especially if the boxers are very close to each other, but positioned in a diagonal line from each other.

At the bottom of the screen, you’ll see two bars for each boxer. The green bar is the health bar and once fully depleted, the boxer goes down for a possible KO. Every time a boxer gets back up, his health bar refills, but not completely. And after 3 takedowns, if a boxer goes down again, it’s an automatic KO. The yellow bar is the stamina bar. It depletes with each punch and when fully depleted, the boxer can’t throw punches (but you can still move and defend yourself) until it replenishes over time. 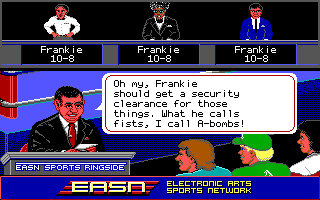 WMDs! Get your WMDs here!

And just like the title says, any boxer can throw low blows, which are hilarious to see if connected. However, since it’s an illegal move, if you are caught doing it 3 times, you’ll be automatically disqualified. You have to be patient and observant to know the perfect time to throw these and not be caught by the ref. However, your opponent can also throw low blows (each boxer has its own characteristic low blow) and they are never get caught!

With just 7 opponents, the game isn’t big and depending on your skill (and how many low blows you throw), you’ll finish it in no time.

How come the newspaper is always on the same day? Are all the fights scheduled for one night?

Low Blow is obviously inspired by Punch-Out, down to the cartoonish looks and humour, but it tries to be its own game with its own identity and to a certain degree, it succeeds. It aged more or less well and although it’s eclipsed by better boxing games, it’s still fun to play every now and then. So, if you want to play a charming little boxing game and don’t have a Nintendo console, then give it a shot! You can even play it in your browser here.

And that’s it for now! Join us next time when we’ll take a look at a game based on a famous franchise geared towards children. Till then, keep on boxing and playing.