Sometimes making a game geared towards children might be harder than making one for teens or adults. Just because you don’t need to worry about complex gameplay, mechanics or storylines, doesn’t mean you get to be lazy about it. Children are anything but stupid and they can see a bad game sometimes better than a grown up. I’m talking about everybody’s favourite beagle: Snoopy.

Snoopy and Peanuts (AKA Snoopy: The Cool Computer Game) is an adventure (-ish) game made by The Edge (no, not the guy from U2) and released originally in 1989 for Commodore Amiga, Atari ST, Amstrad CPC and ZX Spectrum. It was ported to DOS in 1990 and re-released for the Commodore CDTV in 1991 under the title Snoopy: The Case of the Missing Blanket.

And the aforementioned laziness isn’t just in the game. Check out the cover:

While I can respect simple and minimalist covers, I can’t deny that there’s an awful amount of white space in this cover, which uses Snoopy’s “cool” pose, with sunglasses and everything. Even the subtitle is trying to tell us how “cool” it is! You know that kid from school that tried too hard to be “cool”? This is what this cover reminds me of.

Anyway, let’s boot this “cool cat” and check it out:

You might not see it because it only appears in a fraction of a second, but we get a title screen just like the box cover and then a second weird title screen with the company logo going up and down. And then you start the game just like that.

And man, everything is just so slow! Apart from Woodstock (who is a bird and therefore CAN FLY), everyone just moves so slowly! A small advice: jump! Honestly, the jumping animation is faster than the walking animation. And you have a lot of walking in this game. This game might have been called “Snoopy Walking Simulator” or something. And if you’re playing it on Dosbox, you can raise its speed.

And yes, there’s absolutely no music whatsoever in the game. Only some sound effects here and there. The Amiga version, however,  has more sounds characteristic of the original cartoon. 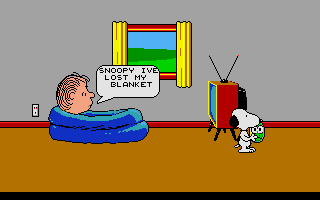 And there’s the plot. Right there!

There’s also very little animation. Apart from some characters, you hardly ever see anyone walking around. And the creepy part is that you’ll find characters throughout the game but you don’t actually see them moving. One moment they’re in one spot and the next, they’re magically transported to another spot. Which means that if you’re looking for a specific character, you need to walk around almost everywhere to find them. Slowly!

Luckily, the map is quite small. Just a couple of houses, the school and two more areas to the far right and left of the map.

But in a way of perhaps prolonging the game or just more laziness, Snoopy can’t carry more than one object at a time, which means you have to do a lot of backtracking in order to get an object, use it and then go back to get another object or putting one object down to get another. Over and over again! 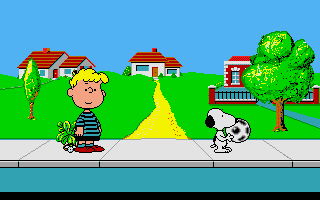 And here’s Schroeder “sliding “across the street.

And the puzzles are simply this: get one object, find out where to use it (or with whom) to get another object and rinse and repeat. Even though there’s a time limit to finish the game, you’ll finish it in half-hour and never touch it again. There are two solutions to finish the game, but I doubt anyone will replay it to try the other solution.

But at least the game looks nice. It was one the first DOS titles to feature VGA graphics and at least it looks as colourful as the cartoon itself.

The CDTV version has music (one track that loops continuously) and better animation and sound. It even has some voice over samples from the cartoon, but it also had the same tedious and monotonous gameplay.

In other words, avoid it! Even to Snoopy and Charlie Brown fans. This is probably the worst game in the entire Peanuts library. 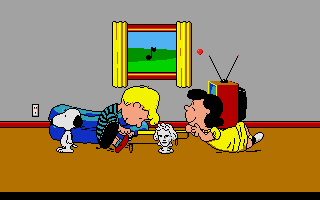 Well, this is probably the most negative review I’ve written so far. But don’t worry, next week, we’ll take a look at not only a better game, but also a highly influential one. Till then, keep on playing (but not this one)!