Like I said before, most genres started as computer games before being made for consoles. In fact, due to the limited fast action in favor of a slow, methodical gameplay, most simulations thrived in the computer realm in comparison with consoles. However some companies did try to port them to consoles, but most console players in the 80s and 90s preferred a more action-oriented approach to gaming. Today’s subject although more known in the Sega Megadrive/Genesis’ library, begun its existence as a computer game. we’re talking about 688 Attack Sub.

688 Attack Sub is a submarine simulation (or subsim) developed and published by Electronic Arts and originally released in 1989 for DOS. It was re-released a year later for Amiga and ported in 1991 to the Sega Megadrive/Genesis and PC-98.

But first, let’s take a look at the covers, shall we?

Man, this envelope went through a rough patch, hasn’t it?

The first cover isn’t bad in theory, with a simple vanilla envelope with the word “CLASSIFIED” stamped on the front. But it doesn’t say anything about the game itself, except that it might be a military type game of some sort.

The consequent variants were a lot better and my favourite is this one:

With a simple image of two Navy boats, it gives you a better idea of what the game is all about, but I still don’t know if this a subsim or a Battleship videogame based only on the cover.

But the Megadrive/Genesis cover is totally different: 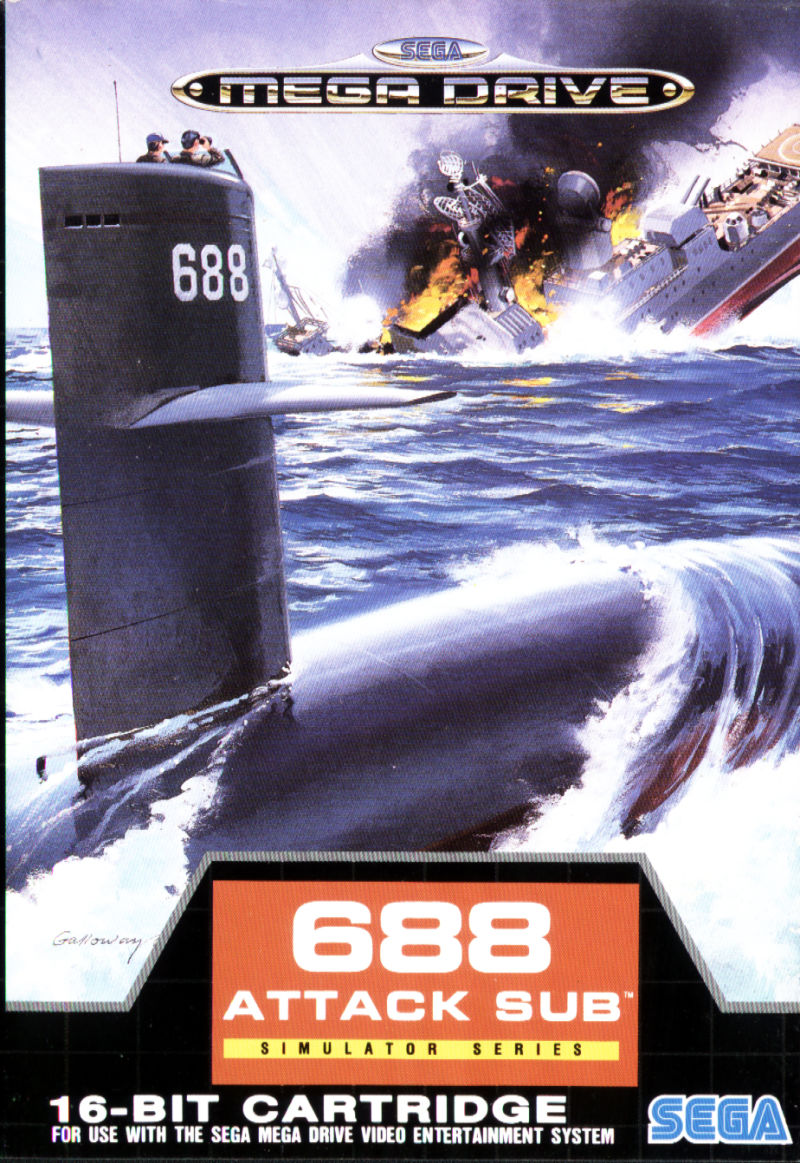 Now this is a great cover! You don’t need anything else to tell you about the game.

But let’s launch this boat, shall we?

As you can see, the title screen shows nothing more than the image of a submarine resurfacing featuring an adequate theme music. It’s not bad and the theme sets a good atmosphere for the game.

Then we have the mission selection screen, where we can choose between 10 missions to play. We can take control between an US 688 class sub or a Soviet ALFA class, except in the first mission, where we can also take control of a 700 class (but it’s absolutely identical to the 688 sub).

The lighting icons next to the missions’ name mean that those missions can be played with another player, each one controlling a different sub. However I have to apologize because I couldn’t play any multiplayer match. These matches could only be played through a modem direct connection and since this game was released before the existence of the Internet, I lack the necessary knowledge to configure it in modern computers. So consider this a single-player review only.

After choosing which mission to undertake, you then have access to the configuration panel, where you can dial up your modem for multiplayer matches (if available) and/or choose your difficulty level. 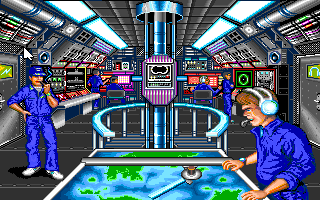 Is the guy on the left smoking a pipe in a confined closed space?

As you can guess, this game occurs during the height of the Cold War and the majority of the missions are between the US and Soviet forces. The missions, while being only ten, are very varied, ranging from training to surveillance to open naval battles.

At the start of every mission, you’re required to go to the radio room to receive your orders and objectives and then you can properly start your mission.

From a screen called the CONN (Conning Tower) depicting the inside of the sub and its crew, you can access 6 control panels in which you have access to the different functions for operating the sub:

And during battles, if the panels suddenly turn red, that means you have a hull breach and you need to resurface before your sub sinks!

In almost every panel, you’ll also have access to a map where your sub is depicted by a square in the middle of it and all the other ships are depicted by color-coded letters. But using your controls at the left bottom, you can also have access to a rough 3D vision of the ocean’s bottom, but it doesn’t depict any other ships. Which is great for navigating slowly at the bottom of the sea, avoiding any rock formations and other environmental dangers.

There is basically no difference between the American and Russian subs, only cosmetically. The only big difference is the lack of missiles in the ALPHA class, but then again you only need to use the missiles in one mission (although seeing missiles being shot in the periscope view is cool).

There are no limits to what you can do while controlling the sub, whether it is to sail away or attacking your allies, but of course, you’ll fail the mission. I do like the little portraits of your crew almost every time you do something, like raising your periscope or arming and firing a torpedo. Usually it takes two torpedoes to sink any ship, but sometimes they might miss the target, luckily you can guide them remotely to any chosen target.

At the beginning of every mission, any targets you detect are unidentified and to properly identify them, you can either use the periscope (if they’re at the surface) or use your sonar analyzer, which will reproduce their distinctive sounds and no, nobody sings the Russian National Anthem in this game.

No, this isn’t the mission success screen.

Due to this strategic way of playing, the game isn’t very action-packed and it might look very slow-paced to most gamers. But if you prefer this kind of gameplay, then 688 Attack Sub is right up your alley.

The Megadrive/Genesis version plays exactly the same, with all the missions intact. And although it has better graphics and the gamepad controls aren’t bad, it also has worse sound and music, even if it has more themes than the DOS version. Also it lacks the crew’s portraits of the other versions.

I haven’t played a lot of subsims to properly compare them to 688, but from a general gamer’s perspective, it might be a bit slow-paced, especially at the start of every single mission, but it grows to a certain level of action at a harder difficulty level and the objectives’ variation gives it a small replay value, but after beating all the missions with both subs, you’ll hardly play it again. So if you like subsims, give it a shot but it might be a bit complex to serve as an introduction to the genre.

So, what do you think of this game? Feel free to leave your comments below and next time, we’ll take a look at one of my personal favourite games, in both genre and theme. Till then, keep it under the sea and avoid the Crazy Ivans.