Like I said in my previous review, this time we’ll take a look at one of my personal favourite games of all times and perhaps the most in-depth game I’ve ever played, Master of Magic.

Master of Magic is a 4X strategy game developed by Simtex and published by MicroProse. It was originally released in 1994 for DOS and ported for the PC-98 in 1996.

4X (explore, expand, exploit and exterminate) is a strategy/managerial genre that’s characterized by selecting a faction, building cities or bases, manage them, explore the game world, raising armies and fighting enemies by employing strategies in battle. Unlike in RTS games, this genre is usually turn-based. It became famous by 2 other titles also published by MicroProse: Sid Meier’s Civilization in 1991 and Master of Orion (also developed by Simtex) in 1993.

But before continuing with our review, let’s take a look at the cover, shall we? 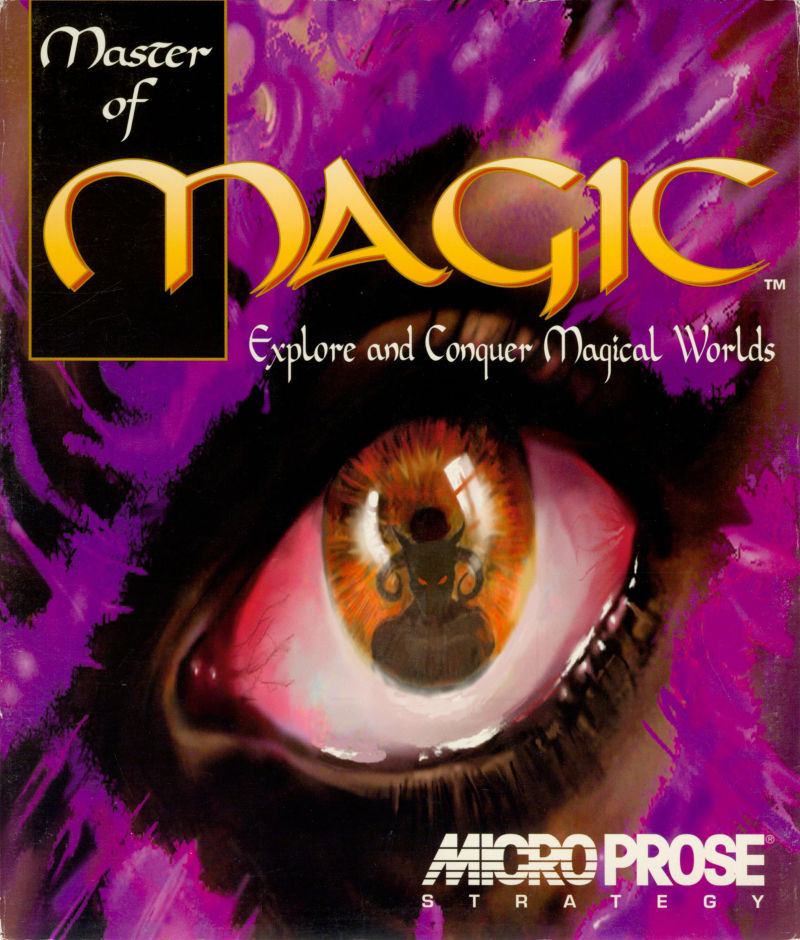 And they say that the eyes are the mirror of the soul!

The cover art is simply stunning, with the reflection of a demon in a stylized eye’s pupil. It gives a sense of mysticism and mystery and it can be considered sort of iconic.

But let’s not waste any more time in conjuring this spell:

The intro depicts a magic duel between 2 wizards and that’s the main objective of the game: you play as a wizard and you have to battle and defeat other wizards, but the way you do it is where the real gameplay is at. One can say that Master of Magic took the mechanics behind Master of Orion and applied them in a fantasy setting, all the while building upon them.

Every time you begin a new game, you’ll get the game options screen where you’ll have 4 choices to personalise and customise your game: difficulty level, number of opponents, land size and magic strength (to cast spells and summon creatures).

Then if you choose the intro difficulty, you’ll get to choose between 14 pre-made wizards (although you can still edit their names) specialised in different schools of magic and each one with a different characteristic. If you choose any other difficulty level, then you can customise your own wizard (although you still have to choose a portrait from the pre-made wizards), choosing spell books belonging to 5 schools of magic, each represented by a specific colour:

There’s also a 6th school, Arcane Magic (represented by the colour grey), which is a general magic school, available to all wizards. If you’re familiarised with the card game Magic The Gathering, it’s very similar to it and spell-wise, it follows the same mechanics and themes.

Also, depending on the points available, you can also choose a special characteristic, which will define your play style and isn’t shared with any other wizards during that specific playthrough. 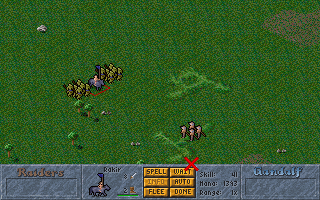 A somewhat empty battlefield, no?

Depending on your choices, you can start in the world of Arcanus (your typical fantasy world), which grants you access to 9 races to select as your starting army, or the world of Myrror, a more dark and harder world (but with more mana and better treasure available) with 5 different races to choose from. And then, the game world you selected is created and you can start your game.

The objective, as I said before, is to defeat the other wizard (or wizards) and conquer both worlds. For that, you need to expand your army, explore the worlds, build more cities and expand them (or conquer them), hire or summon heroes and/or creatures to lead your army, tap into magical nodes, research more spells and finally engage your rivals in battle or use diplomacy to negotiate truces and alliances.

You can only defeat your rivals in 2 ways: either attack and conquer their main capitals (where their wizard towers are located), which will prompt an automatic banishment, or research and cast the Spell of Mastery, which if properly cast, will banish all rivals and automatically win the game. 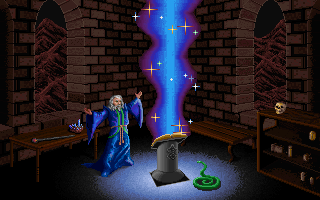 “Do not take me for some conjurer of cheap tricks!”

While the gameplay, in general, is very reminiscent of Master of Orion, the city management and armies’ training is a bit more like in Civilization, in which you have to build specialised buildings to train more powerful and specialised units. But what makes Master of Magic special, is its unique fantasy setting and the wide range of spells available, which are divided into summoning creatures and heroes, spells that influence units and cities and global enchantments. All of this brings incredible deep gameplay, in which there aren’t 2 playthroughs alike.

The game even comes with an item maker program, where you can edit all the magic items one can find in the game. And yes, although you can make a game-breaking item, it’s fun to create items based on famous fantasy weapons.

Do you guys think my wizard tower blends in well?

The sprites might be a bit small, but they’re all well detailed and it’s easy to distinguish one unit from another. The game is very colourful throughout and the animation might be simple, but it serves the game well, especially the visual effects when casting spells.

The music (composed by Brian “The Fatman” Sanger) is superb and it serves to build a great atmosphere without being too distracting. And there’s a good variety of it available, from simple tunes to epic battle themes. The sound effects are also quite simple and serve the gameplay well with the best ones occurring when casting spells.

The only possible criticism I might have (although it’s more of a nitpick), it’s the fact that the micromanagement can become somewhat chaotic when managing several different cities and units, even with the option of appointed viziers that auto-manage the cities for you, and the cities and armies’ screens, which show all the cities and units you have and their current actions and location.

With all of these features, one would think that Master of Magic was a great success, right? Unfortunately, the game was released with a bundle of bugs, crashes and terrible AI, which made it almost unplayable. The latest official patch (1.31) was released in March 1995, a half-year after its original release, which fixed most issues and made it much more playable. But it was only after that patch that Master of Magic became a cult classic that’s still being played and discussed nowadays.

How do I know this? First, there’s still a quite active fan community that produces mods and fan patches that fix bugs left in the 1.31 official patch and rebalances the AI. And there’s also a bunch of ports, remakes and spiritual successors. Here are a few of them:

So, with all of this, do I recommend it? ABSOLUTELY! Like I said at the beginning of this review, Master of Magic is one of my favourite games, not only due to its high fantasy setting but also due to its depth and wide range of gameplay options. And where can you get it? Right here at GOG.com and here on Steam.

Phew! I know that this was one lengthy review, but after my absence, I figured you all deserve it. Luckily, the reviews’ frequency should come back to normal and next time, we’ll take a look at another great classic. Till then, keep on playing and casting spells!