One of the early ways to distribute computer software before the advent of the Internet was through shareware. And like the name implies, is basically the sharing, copying and free distribution of software between its users, with little restrictions placed upon it. It was a great way for small software companies to present and distribute their products freely. Not to be confused with demos!

Demos were little programs with most of its features removed, blocked or non-existent while shareware software either had ads encouraging its users to register it or locked features that could be unlocked by entering a license key, which was given to the user upon registration and purchase.

While shareware initially appeared in the early 80s, shareware games appeared later in the early 90s by the hand of companies like Apogee, Id Software, Ambrosia and Epic MegaGames (yes, the guys behind Fortnite). Unlike demos, shareware games had a lot more content and gameplay that was either limited or divided in episodes, in which the first episode was always free to the public, to encourage gamers to buy the other episodes. 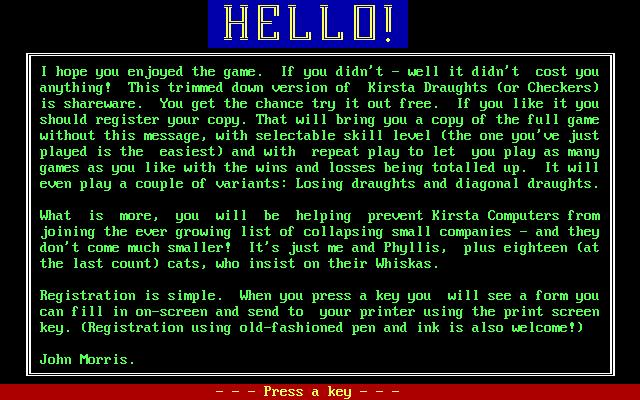 Example of registration screen in a shareware title

To get a free shareware game (or episode) back then, you could either download them through BBS (public servers that were a precursor to the World Wide Web), obtain them through cover-disks that came bundled with software magazines or ask a friend for a copy.

This distribution model became so popular that introduced some of the most important games in videogame history, like Doom or the Duke Nukem series. But today we’re going to take a look at the game responsible for the creation of legendary studio Id Software. I’m talking about Commander Keen.

Commander Keen in Invasion of the Vorticons is a action-platform game developed by Ideas from the Deep (before becoming Id Software) and published by Apogee Software. Its first episode, Marooned in Mars, was released for DOS in 1990 and it’s the one I’ll be reviewing today.

But before we take a look at it, let’s talk about its history first: Commander Keen came to be when famous game designer, John Carmack, came up with a way to program graphics with smooth scrolling in any direction, which could be used to create computer games capable of rivalling 8-bit console games. 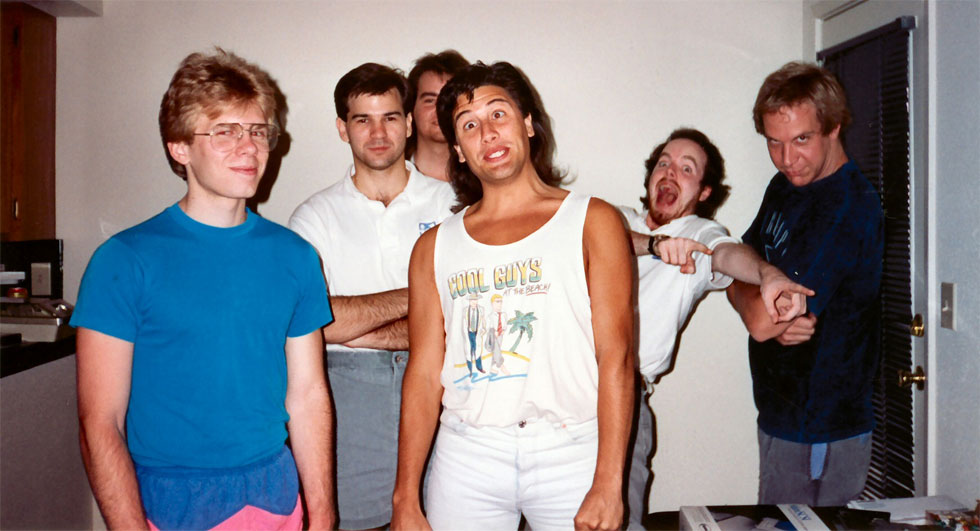 From left to right: John Carmack, Kevin Cloud, Adrian Carmack (in the back), John Romero, Tom Hall and Jay Wilbur.

Carmack showed this to Tom Hall, who then had the idea of recreating the first level of Super Mario Bros. 3. Then the pair showed their work to another famous designer, John “Beautiful Hair” Romero, who (along with Jay Wilbur and Lane Loathe) suggested creating a full demo of Super Mario Bros. 3 in order to pitch Nintendo for a possible PC port. But Nintendo, while praising their efforts, refused the pitch because they wanted their games to remain exclusive to their consoles (except for the Mario edutainment titles, but that’s a story for another day).

Meanwhile, Romero was in contact with Scott Miller from Apogee in an unrelated matter and after Nintendo’s rebuttal, decided to send Miller the Mario demo, saying that Ideas from the Deep (the mini-studio originally founded by Romero, Hall and Carmack) could perfectly create an original game using that engine and Miller was so impressed by the demo that he gave them a stipend to develop the game before Christmas of 1990 and to divide it in 3 parts in order to accommodate Apogee’s shareware model. And the rest is history.

Because shareware games weren’t distributed in game boxes, there wasn’t any cover art of the game back then. However since 1998, Apogee has been distributing Commander Keen online and came up with this artwork to serve as cover: 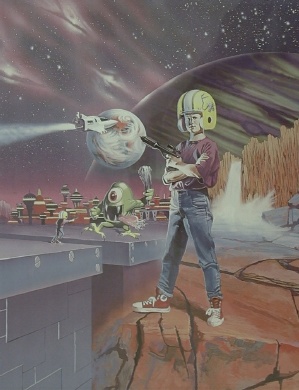 It’s not bad. Very reminiscent of old sci-fi posters and art, which the game takes a lot of inspiration from.

But I’ve been wasting everyone’s time so far. So here’s the intro and the first level of the game:

As one can see, because the game wasn’t shipped with a manual, so all the information, such as instructions and backstory, is found in the game itself. You play as Billy Blaze, an 8 year-old child prodigy, who designed his own starship and dons his older brother’s football helmet to become COMMANDER KEEN – DEFENDER OF EARTH!

One night, while his parents are away and his babysitter is asleep, Billy takes his spaceship to explore Mars, but soon after, the evil Vorticons steal four important pieces of his ship, stranding Billy. Now Billy has to explore Mars and recover his ship’s parts and return home before his parents arrive.

Immediately from the start, you get access to an overworld map, where you can control Billy and access levels in a somewhat non-linear fashion. Although the overworld map isn’t very big, you can enter fifteen levels (plus an extra secret level), which get increasingly bigger and harder. The levels are divided in 2 types: the cities and the shrines. The cities are the main levels and are represented on the map as big buildings. You only have to finish those that have the ship parts in order to finish the game. The shrines are represented as small, blue buildings and although they’re smaller levels, they’re not necessarily easier. The shrines are optional, but they do have items that give points and make the gameplay easier. 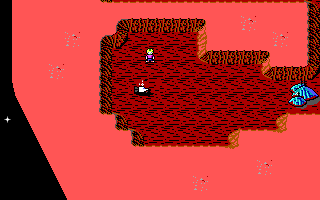 Stranded on Mars with a broken ship…

In these levels, you control Billy from left to right and jump in several platforms to avoid enemies and other hazards. You can also use Billy’s raygun to fight the enemies, but it’s void of charges at the beginning and you have to collect ammo for it. You can also collect other items, like lollipops, soda cans (that look like Pepsi cans), books, pizza slices and teddy bears for points, of which you get an extra life for every 20,000 points.

But what you really need to collect, apart from the ship parts, are the keycards to open the several doors located in the levels and the pogo stick. The pogo stick, which can be found in one of the early shrines, is probably the most useful tool in your possession because it makes possible for Billy to reach higher platforms and secret areas where more items are available for extra points (and lives).

The levels are all pretty well designed, especially some cities, which contain big mazes full of traps and enemies. The game is also very colourful and the sprites, albeit somewhat small, are well detailed. The enemies’ animation is also quite simple but smooth, and Billy himself is equally well animated. 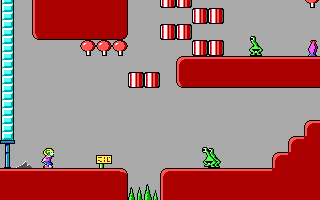 The sound effects, while simple, are adequate and serve their purpose well. Too bad that the game lacks music, because graphically is just begging for it! Still, there’s so many sound effects, that you won’t miss it terribly. But I won’t deny it would be nice to have music.

But the best part of the game for me, besides the level design, are the controls. Whether you’re playing with the keyboard or with a gamepad, the controls are tight and responsive. If you fall to your death, it’s your own fault, not the controls’.

With 16 levels in total, the game has a proper length to it (unless you play only the obligatory levels), but with the lack of difficulty levels, the game feels very easy, especially if you’re used to platformers. Except for the secret level, which is actually hard. 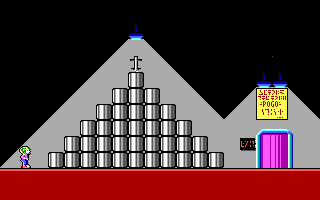 The most important item in the game

Marooned in Mars pales in comparison with the Mario and Sonic series, but it’s still a solid platformer with great controls and overall good level design. It had so much success, it gave the means for Carmack and Romero to properly fund Id Software and later create Wolfenstein 3D and Doom, which in turn, created the first-person shooter genre. So, if it wasn’t for Commander Keen, the FPS genre as we know it, wouldn’t probably exist. And for that reason alone, Commander Keen more than deserves a spot in videogame history.

Now you must be asking, why did I only review the 1st episode instead of the entire trilogy? Well, for 2 reasons: first, I think Marooned in Mars has a game length more or less equal to other full shareware games at the time and second, the other episodes introduced new features, despite being made at the same time. But don’t worry, I’ll review the other episodes in due time. 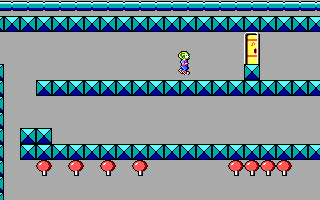 And because the first episode was released freely, you can find it almost everywhere. But in case you don’t know where to look, you can download it here at the 3D Realms page or play it here in your own browser. Or if you’re looking for the entire trilogy, you can buy it here on Steam, along with its sequel Goodbye, Galaxy. Also you download fan-made mods and levels here.

So, do you like PC platformers? Which one is your favorite? Leave your comments below. and next time, we’ll take a look at a very odd game IMO. Till then, put on your favorite football helmet and keep on playing!