If you read the title, you must be wondering: am I reviewing two games at once again? Not exactly. Actually I’m reviewing two versions of the same game: a floppy disk version (Daughter of Serpents) and a CD-ROM version (The Scroll), which contains extra scenes and alters the gameplay significantly from the floppy version.

Daughter of Serpents is a graphic adventure developed by Eldritch Games and published by Millennium Interactive. It was originally released in 1992 for DOS and re-released in 1995 as The Scroll by Nova Spring and Psygnosis in CD-ROM format.

Eldritch Games was a small company based in the UK, that began making role-playing tabletop and board games based on the Cthulhu Mythos. But later, they decided to move to videogames and in 1989 released The Hound of Shadow, a text-adventure game that was well received by gamers and critics alike.

But back to Daughter of Serpents/The Scroll, let’s look at the covers, shall we?

No, I assure you, this isn’t Cleopatra.

As you can see, it features an Egyptian-style queen surrounded by Ancient Egyptian imagery, but featuring prominently serpents, including two at her feet. Although the game isn’t set in Ancient Egypt, it still gives a mysterious aura about it. 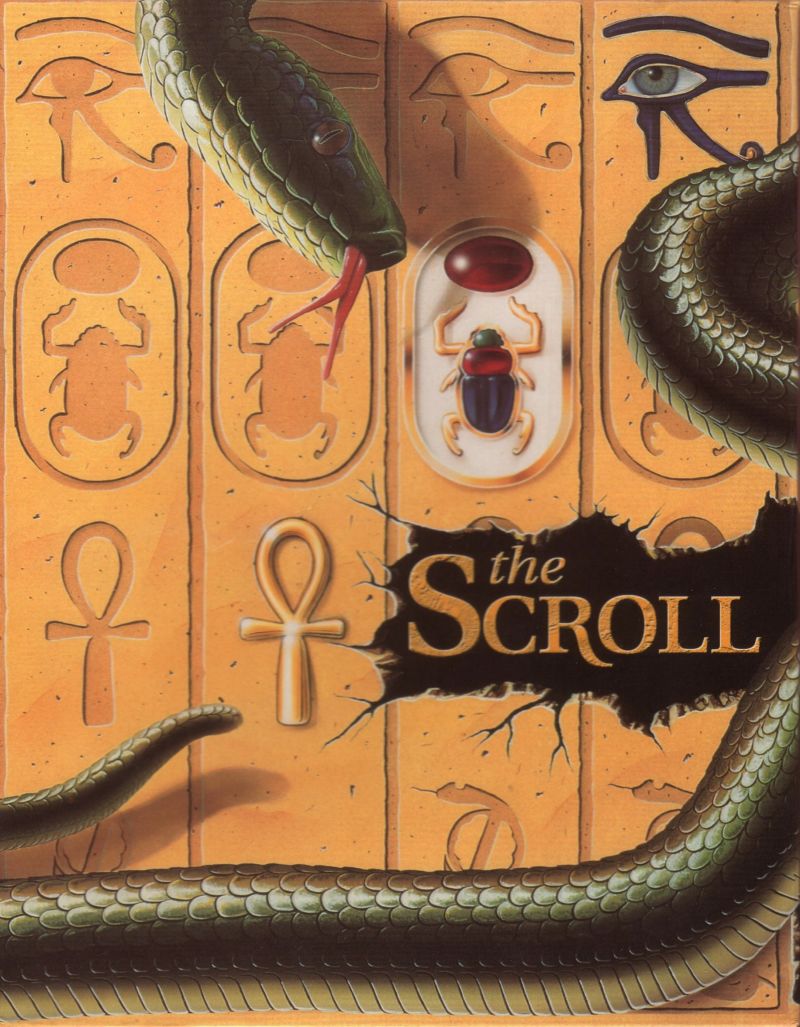 OK, who brought the snake to the Egypt exhibition?

This one’s more simple, but still as effective. It simply shows some hieroglyphs surrounded by a snake.

Now this one has a more ominous look, with the smoke rising and the figures on the side. While with the other two covers, one might get the impression of the game being set in Ancient Egypt, this cover has a more archaeological aspect to it, like you’re about to explore Tutankhamun’s tomb.

Sorry for only showing The Scroll intro here, but I had some issues with the floppy version, and besides, both versions have very similar intros. As you can see, a boat arrives at Alexandria, Egypt in 1925 and one of the passengers, when exiting the boat, is killed by a man, who’s then promptly shot by the police, but then the killer turns into a man-serpent hybrid just before dying. And it’s with this mystery that the game starts, hooking the player’s attention.

But before starting the game, Daughter of Serpents gives you the innovative option to choose between 9 established characters or create your own. This character creation option harkens back to the company’s past as a RPG developer and was also featured in The Hound of Shadow. 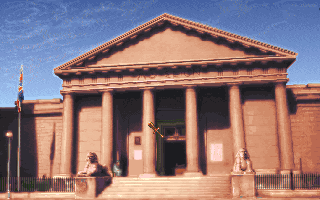 In creating your character, you can choose his/her gender, nationality (UK or US only) and profession, where you can choose between 9: Egyptologist, Traveler, Sleuth, Private Eye, Mystic or Occultist. Then you have to spend your remaining points in several skills, including some outside your chosen profession. To get a better understanding of the character creation, I recommend reading The Alchemist of Istanbul, a pen and paper RPG which also serves as an introduction to the game’s story and came included with the game itself.

So how does the different characters impact the story and the gameplay, if it’s an adventure game? Well, depending on your chosen profession, you can play through three different playthroughs, although the basic story remains the same and the different skills change the dialogue significantly. It increases the replay value drastically by encouraging you to try different variations of professions and skills.

I just wish the rest of the game was equally impressive. The game has a first person perspective with still images, featuring average quality graphics and minimal animation. The gameplay consists in a point and click interface with your mouse icon changing between its several functions. While the mouse interface can be more or less intuitive (except when giving objects to other characters, which requires some pixel-hunting), the inventory system is very cumbersome, as you simply put objects freely in the inventory screen and it’s quite easy for a big object to obscure a smaller one. Not to mention, that to operate a specific object, you need to move it to a different screen (by clicking down the floor) and then use it there (unless it’s to interact with another object and/or character).

In the inventory screen, you can find at the start of the game a map (for traveling) and two books, a guide explaining all the Ancient Egypt mythology relevant to the game’s story (couldn’t this be in the manual?) which includes an option called Essentials, which is basically the game’s option screen. Yes, to access the game’s options (including the save and load options), you need to use your left-mouse button 3 times in 3 different places. This is very counter-intuitive and time wasting for any game. The other book is a diary describing your progress (couldn’t this be the options screen instead?).

Why, hello there, gorgeous!

But at least the story, characters and dialogues aren’t bad. The story has some Lovecraftian elements seamlessly intertwined with Egyptian mythology, although I considered it more supernatural suspense than horror, but it’s still quite enjoyable. The game doesn’t have many characters to interact with but it has a lot of dialogue which is displayed in speech bubbles like in a comic, with certain words in red for dialogue options.

Of all the three playthroughs, the Occultist/Mystic one seems the most satisfying to play and explores more of the story, while the Egyptologist/Traveler one seems the smallest and the least enjoyable. The same goes for the endings. But whatever playthrough you’re playing, the game isn’t hard for experienced players but the gameplay is very linear, especially towards the end.

The music is adequate and provides proper atmosphere but the sound effects are a bit lacking. Also, there isn’t a proper tension during the final part of the game, which is something a game based on the Cthulhu Mythos should provide. You know, the tension, isolation and vulnerability against the supernatural and the unknown that are common Lovecraftian themes.

But in The Scroll, some big changes were made. It isn’t a remake by any means, but more of a remastered version in which the animation, sound and music are vastly improved. It also contains voice acting throughout the game (with the same speech bubbles for dialogue options), which is quite good for the time, but the dialogue itself remains more or less the same.

Messing with the wrong Out……….. *starts foaming from mouth*

It also expands the locations, including a bazaar that wasn’t in the floppy version and some new characters. But the biggest change is the lack of a character creation option. Instead you choose between two pre-established characters: an English Egyptologist or an American Mystic. Yes, now you only have two playthroughs to play and although they’re expanded from the previous version, it severely limits the replay value. And the Egyptologist playthrough is still very short in comparison with the Mystic one.

The emission of the character creation option also denotes another thing: in Daughter of Serpents, you could create a female character and although it didn’t have any impact in  the gameplay or story, there weren’t many games with female protagonists back in the 90s and the fact that The Scroll only has male protagonists doesn’t help. It should have been one male and the other female to choose in my opinion.

Is that Teela’s cobra hood?

So in general, although both versions have a good story and atmosphere with some very interesting ideas (especially the character creation) that elevates it somewhat above the rest, its execution is less than stellar. Like I said before, the inventory system is a mess and the gameplay is very easy and linear. The lack of a character creation in The Scroll turns it into just another average adventure game. I can’t recommend The Scroll, but you might want to give Daughter of Serpents a shot. Still, if you want to try it then click here to play Daughter of Serpents or here to play The Scroll, both in your own browser.

Well, do you like games based on the Cthulhu Mythos? If so tell me which are your favourites in the comments below. I’ll see you guys around and till then………………..PH’NGLUI MGLW’NAFH CTHULHU R’LYEH WGAH’NAGL FHTAGN