No, I’m not reviewing another game with 2 different versions or 2 different games, it’s actually the same game with 2 different titles, that’s all! And it’s one of the most ported and influential games of all times. Even if you don’t recognise the title, I assure you that at least you’ll find the gameplay familiar. I’m talking about Pipe Mania aka Pipe Dream.

Pipe Mania is a puzzle game developed by The Assembly Line and published by Empire Software. It was originally released in 1989 for the Amiga, Atari ST and DOS (and in the US by Lucasfilm Games under the title Pipe Dream). It was re-released the following year for DOS (in the EU), Acorn 32-bit, Amstrad CPC, Apple II and IIgs, Arcade (in Japan only), BBC Micro, Commodore 64, Electron, Game Boy, NES, Sam Coupé and ZX Spectrum. In 1991, it was ported to the PC-88, PC-98 and Windows 3.x (as part of the Windows Entertainment Pack). And in 1992, it was ported to the Sharp X68000 and Super Famicom.

But first, let’s take a look at the covers, shall we?

This is the European cover and probably the most famous one. While I do enjoy the cartoony plumber at the bottom with a huge wrench trying to fix a pipe, I still to this day, don’t understand the huge screaming face that covers almost all of the cover. Is that supposed to be one of the developers? Or just a frustrated player? Am I going to feel frustrated and scream like that by playing this game?

But at least the back cover is a bit better: 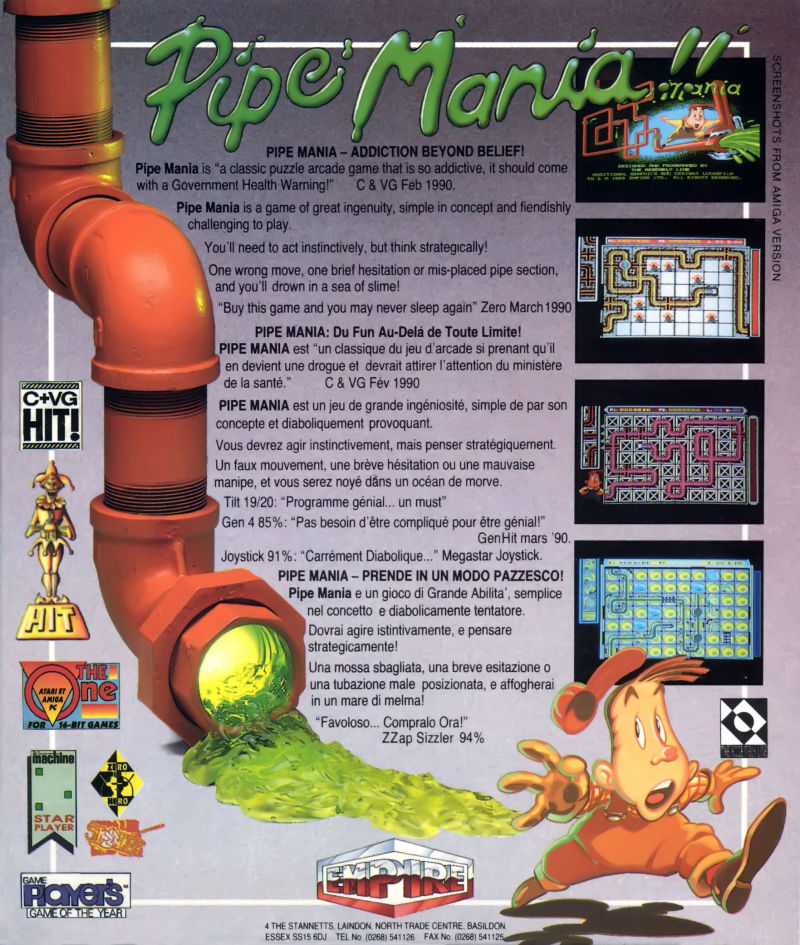 Yes, you better run. I’ve seen what that stuff did to 4 little turtles and a rat in New York’s sewers.

Not to mention the US cover: 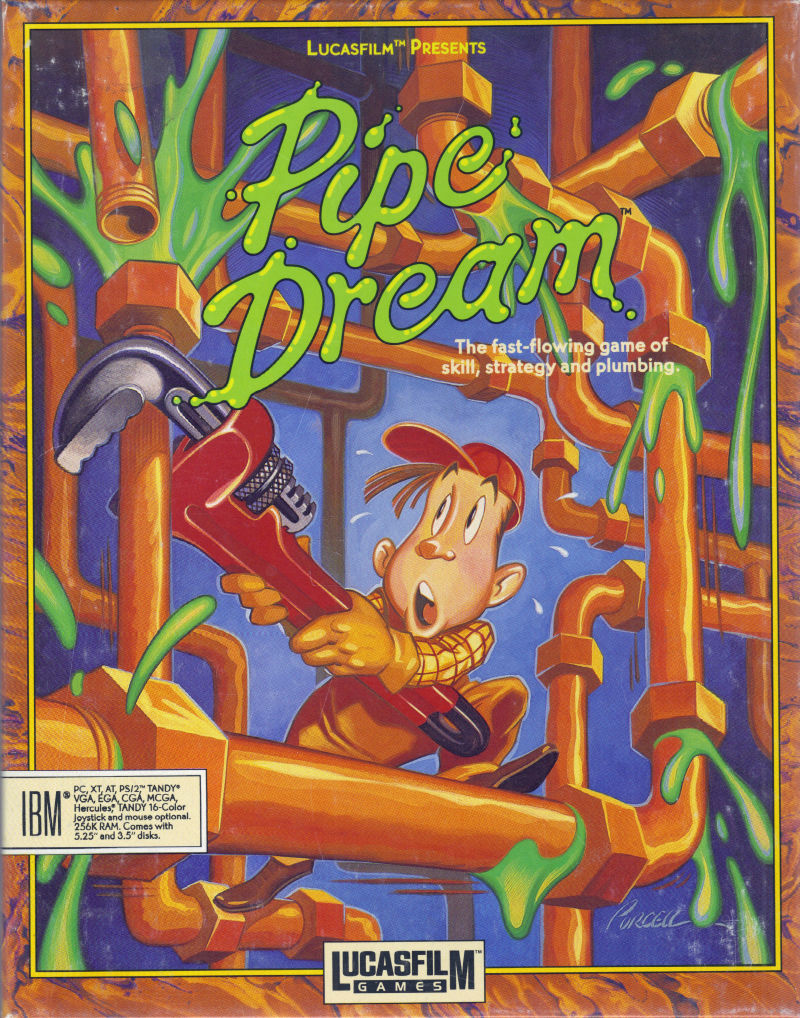 See? He works much better without a giant face screaming behind him.

Just get rid of that hideous face, focus on the plumber, make a nice title and fill the rest with pipes and voilá, an instant classic cover.

And because this game was heavily ported, some console versions have their own covers:

This is the Game Boy cover and while I do appreciate minimalistic covers, this one feels lazy compared with the previous ones. 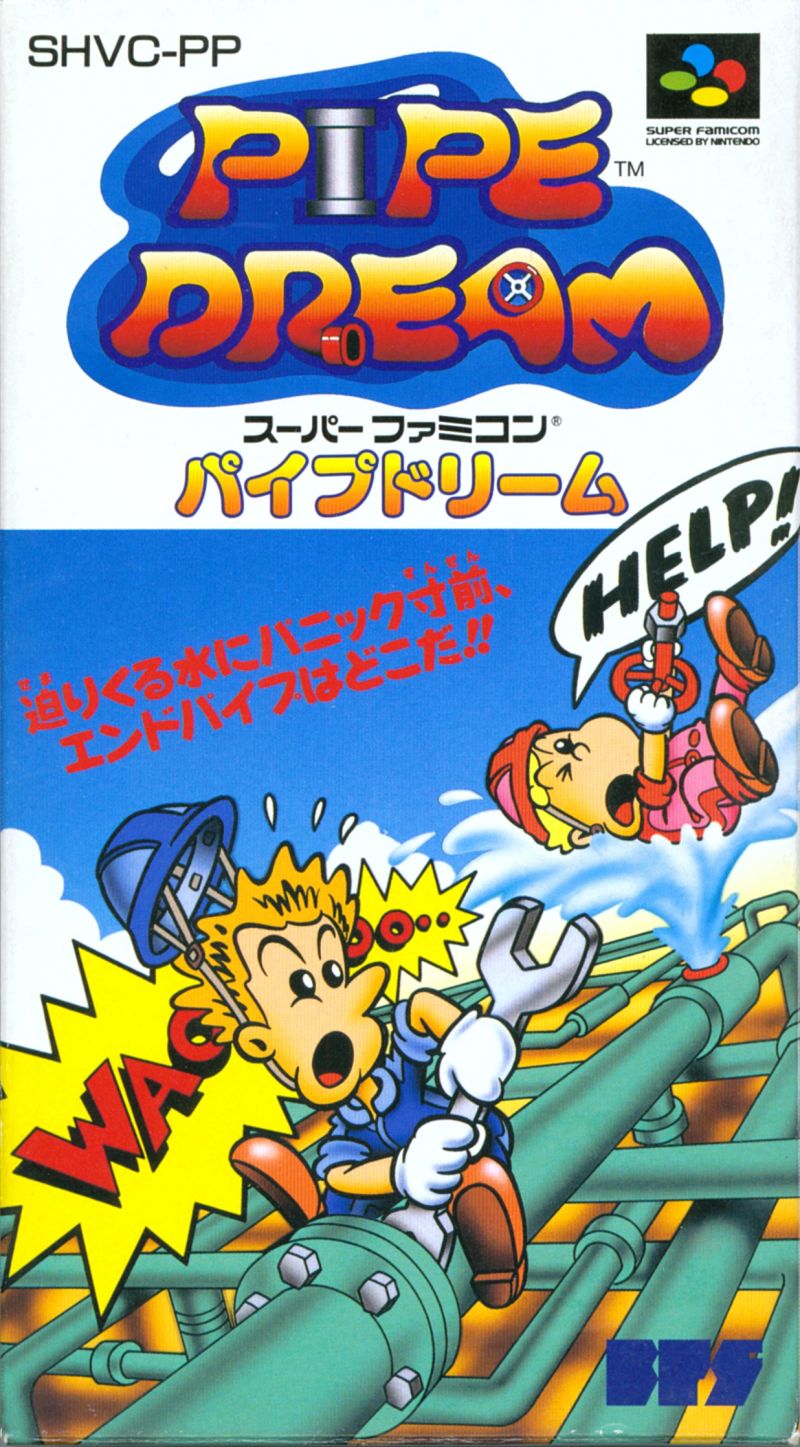 “Damn it, Harold! How many times do I have to tell you? Righty tighty lefty loosey.”

This is the Super Famicom cover and while it’s a bit more cartoony, it’s also quite good and invokes a sense of fun. Because whoever made the EU cover has to explain to me what fun am I to expect with that face. Sorry, I’m still traumatised since childhood by that…. thing!

The title screen is very similar to the cover and the music theme (while being on the PC speaker) isn’t bad. The gameplay is also quite simple to learn: just put on pipes to let the flooz (fancy name for basically sewage waste) flow through them for a certain distance, rack up the points and move on to the next level. And you can blow up any wrong pipe and substitute it with another one. This gameplay takes inspiration after Konami’s Loco-Motion, which was released in the arcades back in 1982.

You can choose between 3 different modes from the menu screen: a single-player mode, a competitive 2-player (through hot-seat) and an expert single-player. You’ll also have access to a training mode, which causes the flooz to flow slower at the cost of not gaining points.

You play through 36 levels which get increasingly harder with the flooz running faster and the distance required getting bigger. But luckily you’ll find special pipes that will reduce the speed of the flooz, giving you extra time. The level ends when you run out of places to put pipes, the flooz catches up to you or it reaches the end pipe, which will appear more or less around level 15.

The flooz must flow!

Every 5 levels, more or less, you’ll have access to a bonus level, where blocks with pipes start to circulate at the top of the screen and you have to make them fall to construct a way for the flooz to flow. The more it flows, the more points you get. At the end of the bonus level, you’ll also get a password to record your progress.

After winning the final level, you return to the 1st level with all your points intact. That’s right, another arcade-style game in which the main objective is basically to rack up points. I recommend trying it out first with the training option to get a good understating of the mechanics of the game and then turn it off to get points. And if you want a real challenge, then try the expert mode or get a friend to play up against.

Pipe Mania/Dream is one of those games that’s easy to learn but hard to master and it’s quite addictive and fun. The graphics and sounds are simple but adequate for a puzzle game. I recommend it for short periods of time and for younger players. Click here to play in your own browser. 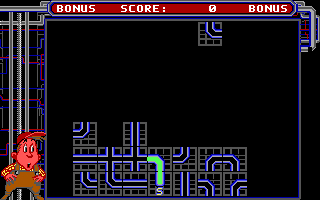 I haven’t played any of the other ports, but the original Amiga version is considered the best one. There have been almost countless clones afterwards but only 2 official remakes: Pipe Mania 3D/Pipe Dreams 3D in 2000 for the Playstation and Pipe Mania in 2008 for Macintosh, Nintendo DS, Playstation 2, Windows, PSP and iOS. I’ve played the Pipe Mania remake for iOS and it’s OK. It’s basically the same gameplay but with new graphics and new options. It’s geared towards younger players and it’s adequate, I suppose. And you can buy it here on Steam.

But Pipe Mania did have a great influence and it’s not uncommon to find some puzzle based on it in modern games. It kind of felt out of the public memory but the core gameplay still remains in our collective memory. It might not have the accolade of Tetris nowadays but it’s still one of the top puzzle games out there.

So, what’s your favourite version of this game? Tell me by commenting below. Till then line up those pipes and keep on playing.