Well, I bet you all know what time of the year it is. Happy Winter Solstice for you all! What? I’m sure not all of my viewers celebrate Christmas like I do, but everybody deserves season greetings anyway. And talking about Christmas, I’ve decided to take a look at one of the weirdest Christmas-themed games I’ve ever played, Christmas Carnage!

Christmas Carnage (AKA Xmas Carnage) is a FPS made by German company Soft Enterprises and released in 1994 for DOS. Not to be confused with the freeware game with the same title, made by John Dondzila and released a year later.

Soft Enterprises made this game to showcase their new graphical engine, the VR-6 3D Engine, at the Computer 94 Fair at Cologne, Germany.

And it was released in a CD sleeve with this cover:

I think everybody gets a good idea of what this game is about just by looking at the cover. And, as you’ll see, although the game doesn’t have this graphic quality, one can’t deny is kind of a cool looking image, albeit a gruesome one.

But it’s time to open this gift and boot it:

As you can see, the game is entirely in German. But since it’s an action game, you don’t actually need to understand German to play it (unless you’re messing with the setup). And as one can also see, this is nothing more than a Doom clone (albeit with some weird and gruesome concepts).

The story is, as far as I can see, has you playing as the Easter Bunny, who’s going through a Grinch phase and decides to ruin Christmas. But Santa Claus isn’t having it, so he dispatches his elves, snowmen and angels (among others) to try and stop him. Yes, this is one the earlier games where you actually play as the bad guy.

In order to survive, you start with an axe, but later on you can get better weapons, like pistols, M-16, grenades and a rocket launcher. The game is divided into 5 levels, which aren’t very big, but designed in such a way, that without the automap power-up (which I highly recommend getting at the beginning of the game), you’ll be easily lost.

This game is notoriously hard (even in the easiest setting) because of 2 factors: 1st, there’s quite a lack of health items throughout the levels and 2nd, the majority of the enemies are literal bullet sponges. They can take a lot of punishment before going down. And in the harder settings, you simply have more enemies to kill. 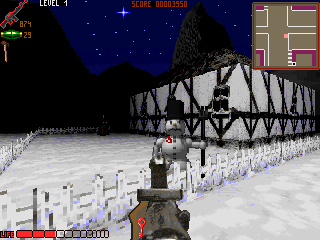 Time to blast a cap at Frosty.

Graphically speaking, the VR-6 engine is superior to the Wolfenstein 3D engine, with lighting effects and the capability to view up and down. But it doesn’t measure up to Doom, which was released a year before. And while I do like the lighting effects (there are some levels with really good shadows), I hate the sprites of some of the later enemies.

Some of the MIDI themes aren’t bad, albeit grating after a while. And the sound effects are average at best. The animation isn’t bad either, but it could be better. I recommend playing it in a fast computer or in a fast-cycled Dosbox.

Like I said before, the gameplay is extremely hard and sometimes your hits don’t connect well with the enemies for some reason. Especially at long distances. The level design can be very labyrinthic and the later indoor levels look very similar between them, graphically-wise. But I must confess, there’s still a good variety of enemies and the game has a somewhat scary atmosphere for its holiday theme at how the lighting and the shadows are employed.

For those who hate Elf in a Shelf, this is your moment.

Apart from all this, it’s still your run-to-the-mill Doom clone, where you kill everyone on sight and collect keys to open doors. It’s not very good, but I’ve seen worse. I just wish it was easier to maintain the joke, because the harsh difficulty curtails the dark humour and fun this game might have brought.

Still, if you’re looking for a weird Christmas experience and you’re a classic FPS fan who doesn’t mind the high difficulty, then you might want to give it a shot. You can even play it here, in your own browser.

Soft Enterprises then made one more game with this engine, The Hidden Below, which I might review for another day.

So, what’s your favourite Christmas game? Tell me below in the comments, in our Facebook page or on our Twitter feed.

Well, this is the last review of the year. I know that 2017 was a very busy year but I like to believe I wrote some great reviews here and there. I just hope that 2018 will be even better! So, have a great Christmas (even if you don’t celebrate it) with lot of presents, be it retro or modern, and a Happy New Year! Until then, watch out for the Easter Bunny and keep on playing! See you all in 2018!