I think reviewing the first titles of popular gaming franchises that still continue to nowadays has become sort of a running theme around here, hasn’t it? Then again, a lot of popular gaming characters have humble beginnings, like probably the manliest character in video-game history having started in a shareware title. And believe it or not, I’m talking about Duke Nukem.

Duke Nukem is a platform/action game made by Apogee Software and originally released in 1990 for DOS. It was re-released digitally in 2013 for Macintosh and Windows.

And in proper shareware tradition, Duke Nukem is divided in 3 episodes, the first of which was distributed freely through computer software magazines in order to garner attention in the public to order the other 2 episodes by mail.

And like always, let’s first look at the covers: 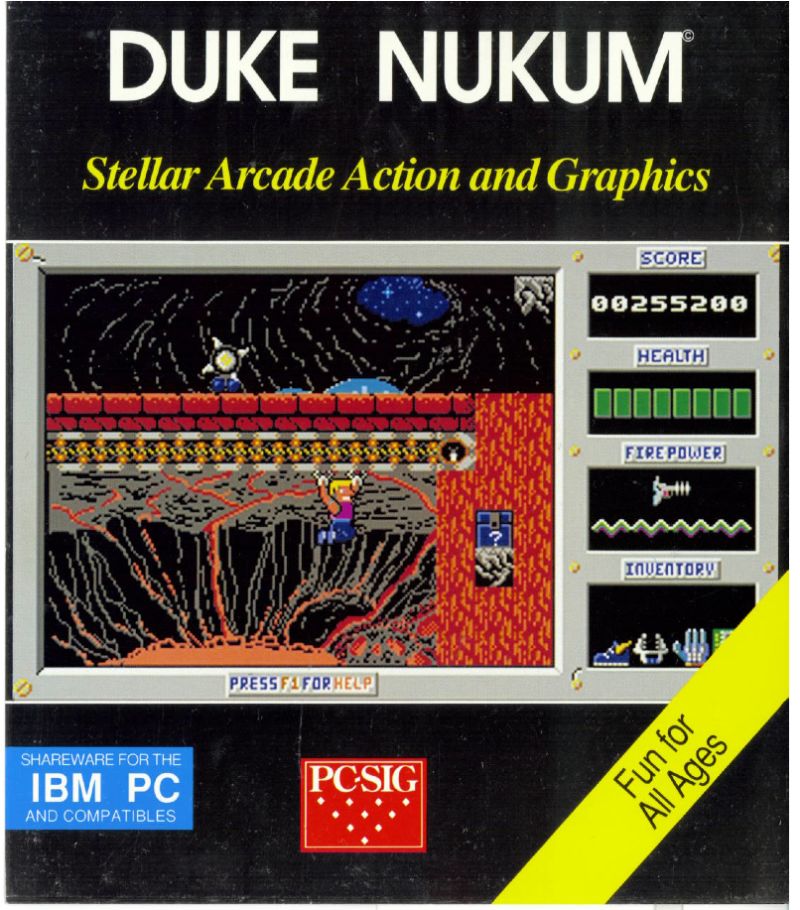 Because Duke Nukem is a shareware game, it was originally distributed on sleeves with just a screen capture image. But however… 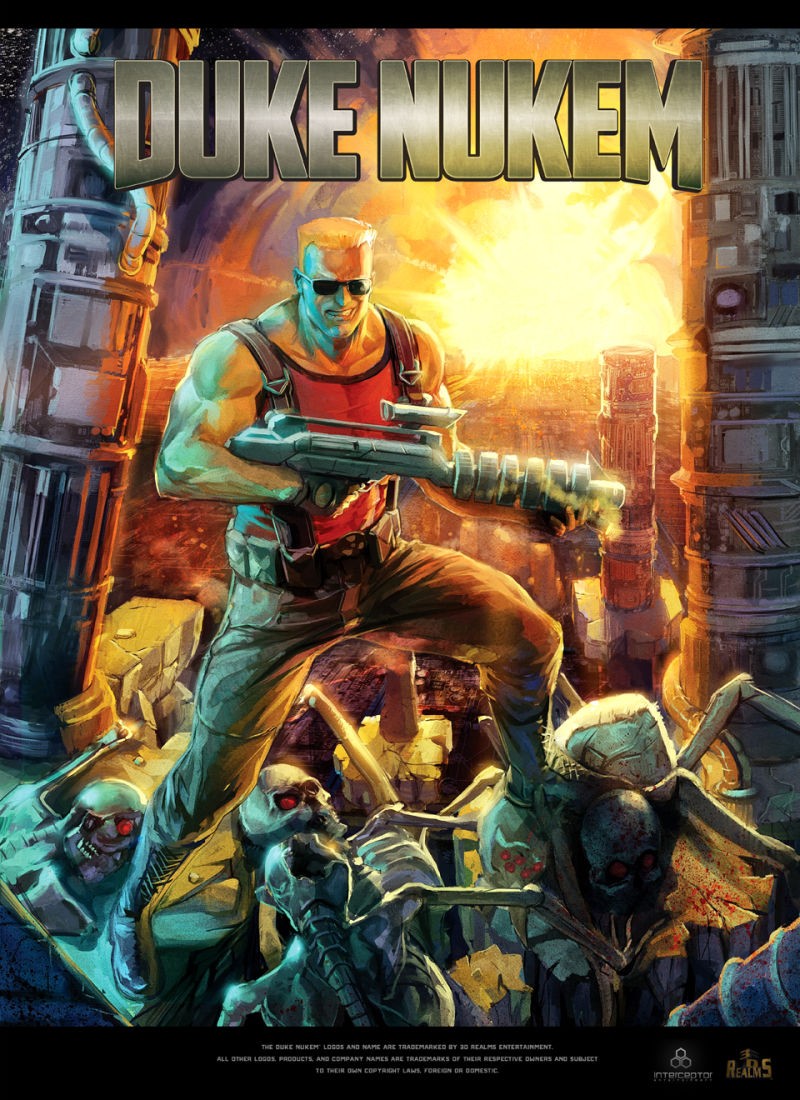 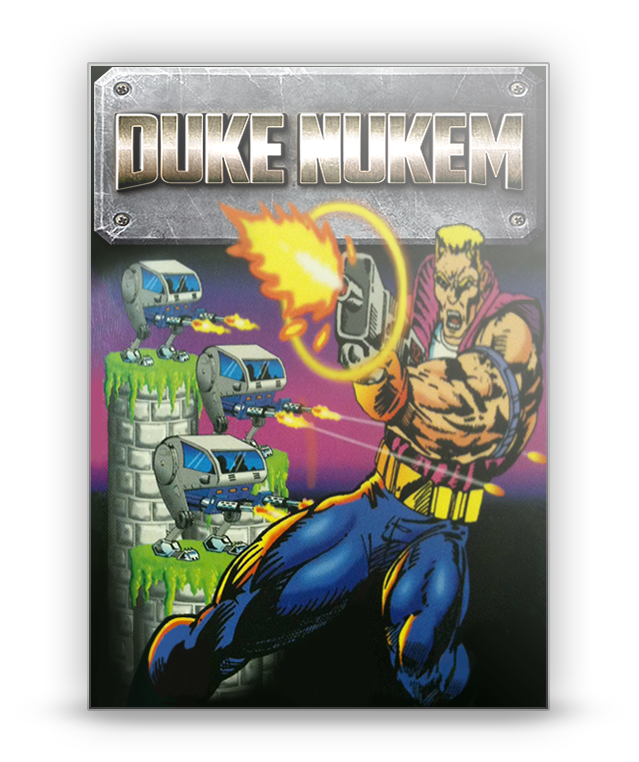 Now these are more proper cover art and perfect for any action title. Our titular hero on the foreground surrounded by monsters is as classic action iconography as it gets. Although the first cover is very reminiscent of the sequels’ cover art and the second cover is the most faithful one to the game itself.

The story is pretty simple but very Sci-Fi B-movie-ish: an evil mad scientist called Dr. Proton creates an army of robots to conquer the world and only one man can stop him: Megam… sorry, Duke Nukem! And don’t be fooled by the title screen. You see, when Apogee created this game, they failed to notice that there was already another character called Duke Nukem (from the Captain Planet cartoon), so they change the title to Duke Nukum to avoid legal problems. However, Apogee later found out that the name “Duke Nukem” was never registered, so they change it back in the sequel. However, it’s still possible to find earlier versions of this game with the original Duke Nukem title.

Yes, believe it or not, this IS the original Duke Nukem!

The gameplay is actually pretty simple: you take control of Duke throughout ten levels per episode and face Dr. Proton at the end of the last level of each episode. You need to reach the end of each level and go through a door that takes you to the next level (except obviously, the last level), destroying several enemies and avoiding traps, initially with just your futuristic gun. You can collect all sorts of items along the way, like extra guns to upgrade your gun (only to increase the fire rate), helpful items like grappling claws or jumping boots (which some can be carried from level to level, but you’ll lose them all at the beginning of each episode), items just to gain points and also healing items.

Some of these items can only be found inside boxes that are opened by shooting them. However, some of these boxes might contain exploding dynamite that’ll hurt you. And there are special items that are essential to finish some levels, like keys and others. The enemies are varied and some require more than a simple shot to destroy them. However, there are no bosses (except for Dr. Proton himself at the end of each episode).

The 1st episode is extremely easy and great for beginners, however the 2nd episode might the hardest and longest of them all and the 3rd episode might be a bit easier than the 2nd one, but it has the toughest boss fight of all 3. But you can play the episodes in whatever order you prefer. The 1st one, called Shrapnel City is your first battle against Dr. Proton as he attacks with his Techbot army. In the 2nd episode (Mission: Moonbase), after defeating Dr. Proton in the previous episode, he flees to his hidden base on the moon and Duke gives chase after him. In the 3rd episode (Trapped in the Future), Dr. Proton uses a time machine to escape to the future but again Duke follows him for their final confrontation.

Like I said before, each episode has 10 levels and I have to say that each level feels unique in their own design, with some labyrinths here and there and lots of hidden areas where you can find all types of bonuses. And since there isn’t any time limit, feel free to explore them to your heart’s content. You also have close to infinite lives, since every time you die, the game automatically loads the latest save state. And the game can only be saved between levels, so make sure to ALWAYS save after finishing a level. The worst part is dying near the end of a level and be forced to repeat the entire level. 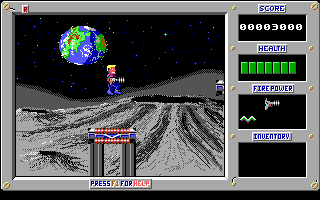 Because it’s a shareware title, Duke Nukem doesn’t have the best graphics for the time and the sprites are a bit small, but at least I like the colours and there are some nice graphical effects like reflective surfaces. The animation is equally simple but still quite fluid. But unfortunately, there’s no music (apart from some short tunes here and there) and the sound effects on the PC speaker are as primitive as they come. However, just like most shareware platformers, the best feature are the controls, which couldn’t be better. Using whether a gamepad or the keyboard, the controls are perfectly sensitive and responsive.

Of course, in this game, Duke hasn’t quite gained his “ultra macho” personality (nor his iconic sunglasses) which he became famous for, but you can still see some initial elements of it during his interactions with Dr. Proton at the beginning of each episode. 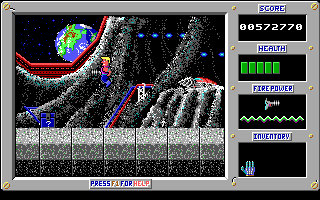 Although being a simple action platformer, Duke Nukem had the necessary success to warrant 2 sequels, the second of which became the smashing hit we all know and love, but that’s a review for another day. Still, for any Duke Nukem fan, I say to give it a shot (even if you don’t really appreciate platformers).

You can go here to download the first episode free of charge, along with a level editor (or here to play it on you own browser), but unfortunately, the other 2 episodes are no longer available digitally, so good luck finding any copies of them.

So, are you fans of Duke Nukem? Which are your favourite games of the series? Tell me below in the comments, on our Facebook page, on our Twitter feed or on our Steam group. Next time, we’re back to the streets! Until then, keep on playing and chewing bubblegum (as long as you don’t run out of it).