DISCLAIMER: I’ve received a copy of this game through my Steam Curator page, so I won’t blame anyone if this review is taken with a pinch of salt. However, I promise to be as objective as possible.

There are some games that usually pass beneath the radar (or I’ve never heard of), but that doesn’t mean that they don’t deserve to be featured here on Retro Freak Reviews (and I’m sure you’ve read the disclaimer above). Anyway, today’s feature is Expendable.

Expendable (AKA Millenium Soldier: Expendable in some European countries) is a shoot’em up/action game made by Rage Software and originally released in 1998 for Windows and in 1999 for Dreamcast. It was ported the following year for Playstation and in 2016, it was re-released for Windows and Macintosh in GOG.com and in 2018, in Steam (but only the Windows version).

But, as always, let’s look at covers first: 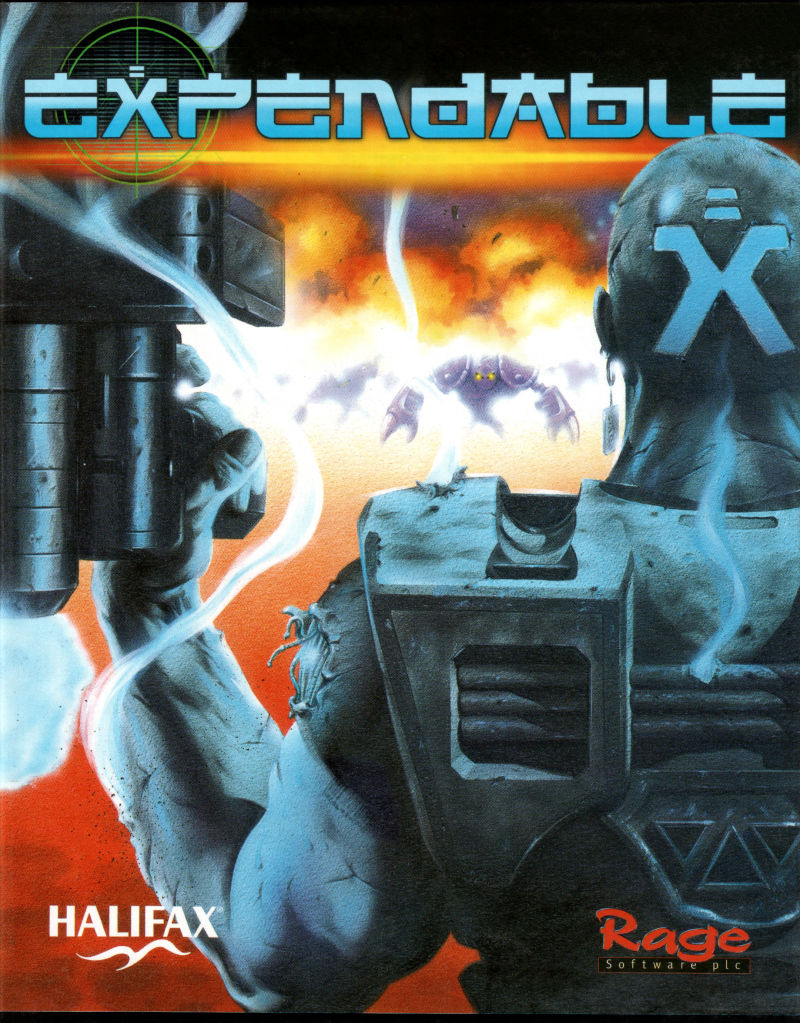 This is the PC cover featuring a bald soldier guy (with a wicked tattoo on the back of the head) standing with a weapon on his hand in front of a group of aliens. It’s not a bad cover and it shows exactly the type of game it is.

But the former wasn’t the only PC cover in existence:

I won’t deny that the X logo is cool and all that, but honestly, I hate covers just featuring logos or minimal design. It’s  not only impossible to tell the type of game it is, but in my opinion, logo covers are just lazy!

However, the console versions had their own cover:

Well, it might not be as stylistic as the PC covers, but it’s without a doubt, more action-packed. It became the most famous cover of the game and it’s easy to see why and I’m kind of torn between this one and the original PC cover.

Anyway, it’s time to boot this sucker and mow down waves of aliens:

And as funny as the intro is, it doesn’t explain the backstory at all. But according to the manual, in the far future, mankind has taken to the stars and colonised several planets, but an hostile alien race started to attack and conquer said colonies. So, an army of clones is created and sent to liberate the colonies from the aliens. With one clone soldier at a time, apparently (or two, if you’re playing with a friend). So, everytime you lose a life, you don’t actually lose it, one of the clones dies and it’s substituted by another, hence the title (I think there would be more sense to just send all them at once or in large groups like, oh I don’t know, AN ACTUAL ARMY?!)

So around 15 levels (without counting the bonus levels), you go around several planets (depicted in the nice waiting screens), collecting several weapons and power-ups and shooting aliens in the face (and in other parts too) until they’re defeated. And that’s about everything you need to know about the game’s backstory. Then again, it’s a run and gun action style game, there isn’t much else needed. And that’s where the problems begin: from the generic looking clones and the equally generic looking aliens (that most of the time, look more like robots) to the level design (that’s not as generic as one would expect, especially in the later levels). 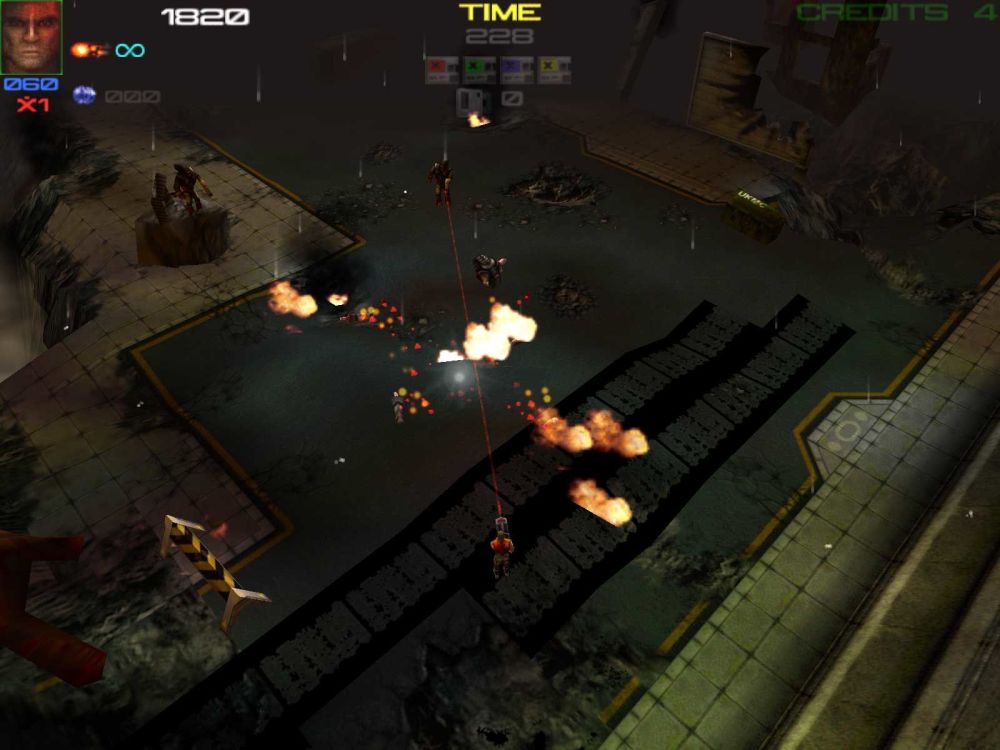 But although all the weapons are cool (except for the grenade launcher), you can only carry three at a time, and the moment a particular weapon’s ammo ends , it reverts back to your initial weapon (that has infinite ammo but it’s also pretty week). But for me, there are two unforgivable sins that a game of this particular genre should avoid: first, it doesn’t matter how many extra weapons or power-ups you were able to collect, it’ll always revert back to the initial weapon at the beginning of each level without any power-ups; and second, the controls aren’t very good (which is essential in any action game). It doesn’t matter if you’re playing with a gamepad, a joystick or the keyboard; the controls will get from over-sensitive to non-responsive in a matter of seconds (really awful if it occurs during a boss battle). The best control combination is using a mouse along with a WASD keyboard scheme (like in a modern FPS), but it’s still far from perfect.

However, the game still has a few good points. Like I said before, the level design isn’t that bad, with some colors here and there and lot’s of secret areas to discover, the UI ingame is quite helpful, with the clone’s face in the corner changing to a skull as you lose health; the waiting screens look really nice, the weapons are almost all good, the sound effects (especially the explosions) are great and some of the bosses’ designs and battles are actually fun and challenging. The little humor there is, it’s actually funny and if there was more of it, the game might have stood out more instead of looking so generic and bland. The animation is okay as far as later-90s 3D games go, but the soundtrack is almost non-existent. And as far I liked the level design, the fixed camera sometimes changes perspective without notice, which can be a bit disorienting. 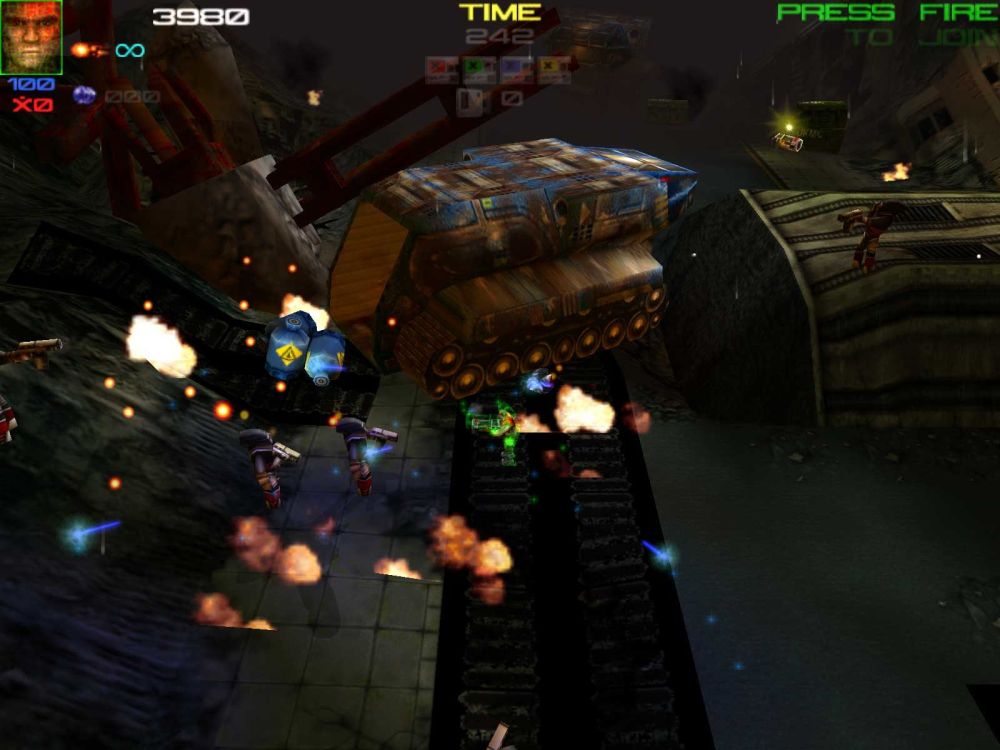 In overall, I consider Expendable a pretty average game and if you’re a fan of run-and-gun style shoot’em ups; like Contra, Cannon Fodder or Midnight Resistance, you might want to give it a shot but, otherwise, I can’t really recommend it. Like I said before, it’s too generic and bland. If it had better controls and more humor throughout the game, Rage could have a serious spiritual successor to Contra on their hands.

I haven’t played any of the console versions, so I can’t really compare them with the PC version. You can buy the PC version here at GOG.com or here at Steam. Around 2012, a port of the Dreamcast version called Expendable: Rearmed was released for Android, but it’s no longer available on Google Play.

I know this was a somewhat short review, but then again, there isn’t much to say about this game. But next time, I promise to avenge this with a better and bigger review. Until then, keep on shooting and playing.