Like I said before in my Emilio Butragueño ¡Futbol! review, I’m a casual football fan that prefers watching national teams over clubs and there’s no bigger international competition than the FIFA World Cup, currently ongoing in Russia (just don’t ask me what the hell happened with Germany because I also have no idea).

And of course, football has millions of fans worldwide which mean that football video games should be more common nowadays (instead of EA’s FIFA series and Konami’s Pro Evolution Soccer, which have a new release every year with almost no new features). But back in the 80s and 90s, there were several football games in the market, coming originally from the arcades and ported to home platforms.

Today, we’re going to take a look at one such game but based exclusively on the 1990 World Cup tournament that occurred in Italy. It’s an unofficial title because FIFA only decided to officially sponsor video games since 1994.

But as always, let’s first look at the covers:

This is the European cover which features some famous football players of the time (at first glance, I recognise Maradona, Butragueño and Gullit, among others). It’s a very colourful cover full of average drawings of popular players. It isn’t a bad cover and it shows exactly what to expect from the game.

But the US version had its own cover:

Now, this cover is simply a photo from one of the matches (Cameroon vs England in the quarterfinals, if I’m not mistaken). It isn’t a bad cover either but isn’t as colourful or memorable as the European cover.

But it’s time to go to the main event and shoot this ball to the goal:

As you can see, the game is as simple as it gets, with a very plain intro featuring a nice, albeit repetitive music theme. Then you get to the main menu, where you can choose to play a friendly match against the computer or against a friend, go straight to the World Cup tournament or mess around with the options, like control schemes and the time length of the matches.

But before playing any match, you need to choose which team to control. All 24 teams are classified by 4 stats: Skill, Speed, Aggression and Strength, that range from 1 to 5. Then you choose which formation do you want and which players you want for each position on the field. You can even put defenders on the attacking positions and vice-versa, although it isn’t recommended for obvious reasons. All the players are also classified by the same aforementioned stats, so you can make your own squad with your favourite formation.

Then a newscast anchor comes up, introducing the match and the teams and even says who the favourite to win is, according to the aforementioned stats. Surprisingly, Italy seems to have the highest stats, although it was West Germany that ended up winning the 1990 World Cup. And all the team’s squads seem to be correct (I haven’t checked, truth be told). 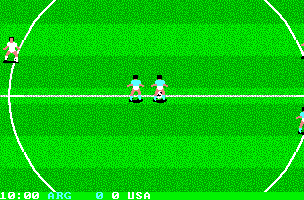 And finally, the match starts. At 1st glance, it looks like your typical top-down view found in almost every other football game at the time, but then when you see the players fully shown and the angle of goals, it’s revealed that it has a sort of inclined top-down perspective. There’s also a small horizontal bar on the bottom that shows the result, the time and the name of the player that currently has the ball.

The match view almost fills the entire screen, which is what I’m looking for in a football game and there’s a blinking arrow next to the player you’re controlling pointing towards the opponent’s goal, to know where you should be going. The only thing that’s missing is a full pitch view on the side to know exactly our position on the field.

The ball automatically sticks to each player’s feet and although some veteran gamers might not like that, personally I do because it’s easier for inexperienced gamers like myself. And also our goalkeeper is mostly controlled by the AI until he gets the ball, which is another blessing for newcomers to football video games. And although the difficulty is linked to each team stats, even if you’re controlling the strongest team against the weakest team, the match’s difficulty is hard. I wish there could be a difficulty level selection option available.

The control scheme is the one commonly found in all retro football games with 4 directional buttons and one action button to shot and pass the ball or to tackle opponents (the longer you push the button, the stronger will be said action). I personally found the controls to be average, either playing with a gamepad or the keyboard, but I didn’t like the fact that you can’t use the gamepad to navigate through the menus.

Also, and although the manual refers to the referee’s ability to use cards, I didn’t see any cards or any punishment whatsoever. Either it’s very hard to do rough actions worthy of penalties or the referee simply wasn’t programmed into the game.

The graphics are okay for a game at the time but nothing spectacular. The only sound effect you’ll hear is the sound of kicking the ball, which is as simple as it gets, so apart from the nice (but repetitive) music theme, the game’s quite lacking in the sound department. 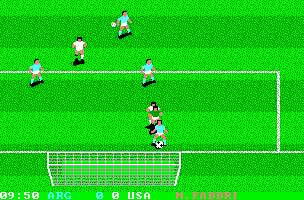 In conclusion, World Class Soccer is a pretty average football game that was quickly surpassed by other titles of the time, like World Cup Italia’ 90 by Sega and the groundbreaking Kick-Off 2 (which we’ll review at a later date). So if you’re looking for an easy-to-use football game, you might want to give World Class Soccer a shot, but if you’re looking for a quality football experience, then I don’t recommend it. And if you want to try it in your own browser, click here.

However, the game came with a slew of extras, like a trivia quiz, a wall chart to fill the results, a booklet full of information about the tournament and even a form to fill to enter a competition to win tickets to go watch the finals at Rome! It’s like an entire box dedicated to the 1990 World Cup in which the game itself is just a small part of an entire football experience.

That was our review, and I want to apologize for not reviewing or even streaming for more than a month, but I had a lot of professional and personal stuff to do. And I know I wasn’t supposed to review this game now, but with the World Cup currently going on, I thought it was a good idea to review a retro football game.

Next time, we’ll take a look at a very dark game from the mind of a very prolific sci-fi writer that has recently passed away. Until then, who do you think will win the World Cup? Let me know and keep on playing.