And again we’re going to take a look at not just a truly classic game, but also a highly influential title that helped define an entire genre spawned several clones and influenced several other titles. I’m talking about the one and only SimCity.

SimCity is a simulation/managerial game developed by Maxis and published by Infogrames. It was originally released in 1989 for the Amiga, Amstrad CPC, Commodore 64, DOS and Macintosh. It was re-released the following year for the BBC Micro, Atari ST, Electron, FM Towns, PC-98, Sharp X68000 and the ZX Spectrum. In 1991, it was ported for the SNES and the CDTV. In 1992, it was again re-released for Windows 3.X and in 1993, for DOS as an Enhanced CD-ROM version and for the Acorn 32-bit. In 1994, it was ported for OS/2 and in 1995, it was again ported for Macintosh (Enhanced CD-ROM) and Windows 95 (version 2.0). In 1999, it was ported to Symbian and Palm OS. In 2006, the SNES version was re-released in the Wii Virtual Console and in 2007, the original version was re-released for modern Windows as SimCity Classic.

SimCity was originally conceptualised by Will Wright, who developed it as Micropolis in 1985 for the Commodore 64 and pitched it to several publishers, but it was originally rejected due to the latter’s lack of belief it would sell. So Wright founded Maxis alongside Jeff Braun to publish the game along with Infogrames and Brøderbund.

But enough of backstory and let’s look at the covers, shall we?

This is the original cover and it features an aerial view of Sydney, Australia (you can tell by the Opera House at the bottom) with some colourful drawings of some buildings juxtaposed. It’s a very good cover and it hints at the game’s content funnily. Definitely my favourite cover. 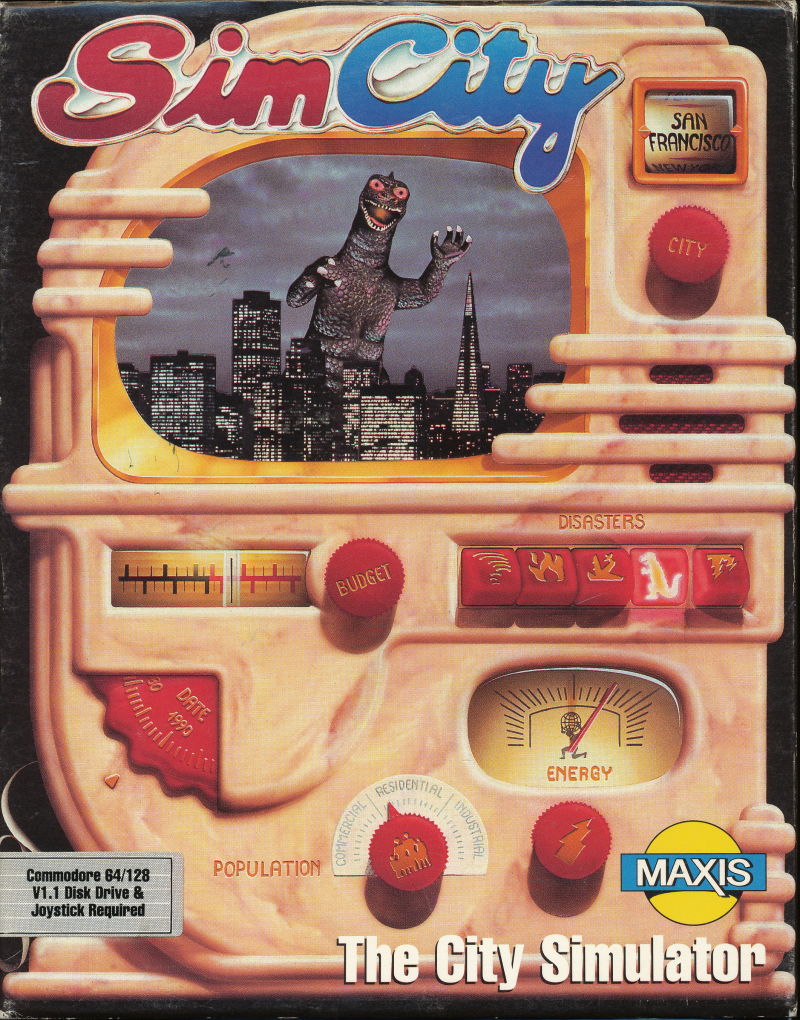 This is probably the most famous cover. It features a sort of retro-techno machine with several of the game’s options and a picture of Godzilla. It’s quite a nice cover, but I think I prefer the original cover over this one. Toho however, didn’t like the unlicensed depiction of Godzilla and forced Maxis to change the cover:

I have to confess Godzilla makes this cover look a lot cooler.

But the SNES version had his own cover:

While I do like the title design, this is a pretty unimaginative cover. Probably the worst cover of them all.

This is the Windows CD-ROM cover and it’s based on the 2nd cover, as you can see. It’s quite a good cover with some very clean lines.

But enough cover art and it’s time to boot this sucker. Well, I should say suckers, because for the purposes of this review I played 3 different versions of this game: the original DOS version, the Enhanced CD-ROM version and the Windows 95 version (although I didn’t play the latter a lot because it doesn’t run well on Windows 10, even patched).

Right in the title screen (which has a nice touch by using a street sign), you can choose between 3 options: start a new city from scratch, load a previous city or play one of several scenarios. We’ll start with the 1st option since it’s the game’s main mode and the most played.

When starting a new city and after choosing the difficulty level and the future city’s name, you’ll be given an empty terrain (with likely a river running across it) to start building your city (unless you have the Terrain Editor, where you can create your own terrain to play in).

Immediately you’ll notice a different UI than most games at the time. There are 2 windows (the main one and a terrain map), which you can edit its size like it was a Windows program. On top, there’s a menu bar with 4 menus with several gameplay options. But we’re going to focus on the main window because it’s where the main gameplay occurs. 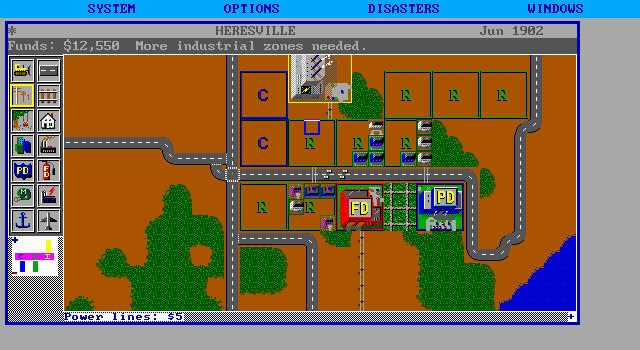 The main window contains a screen with an overworld POV and on its left, a group of several icons, each representing what you can build (except for the bulldozer, which only serves to remove). Below it, there’s a small graph with 3 coloured lines. each line representing the growth of the 3 main zonings of your city: Residential, Commercial and Industrial.

You see, you don’t actually build your city building by building (unless they’re public buildings). You actually plan zonings on the terrain where buildings can be built on, but however, as the mayor, you have to provide all the necessary services required for living in a city (namely electricity and transportation). Building roads and rail tracks are quite easy actually, but to provide the electricity you need first to build a power plant (coal or nuclear) and then power lines to distribute the electricity to your city.

As your city grows, you’ll also need to build other services, like Police and Fire stations, airports and seaports. But also some entertainment for your citizens, like parks and stadiums. Of course, not only you have to build all these for your city to grow, but you’ll also have to manage the city budget.

The budget window is also another important option because it’s where you manage the taxes you collect and then distribute that money between your Transportation, Police and Fire departments. And unless you choose to auto-budget, the budget window appears at the end of every year when the taxes are collected.

But don’t think is that easy to build and run a city, because not only you have to properly manage your funds, you also need to focus on not letting crime and pollution rise or your citizens, commerce and industry will leave to better pastures.

And still, that’s not the worst that can happen. If you paid attention to the video above (or played the game), you probably have noticed a Disasters menu. Well, this is a list of all the disasters that can randomly strike your city when you least expect it (that is, you can prevent them from occurring at the expense of a tax cut or you can directly activate a disaster from the aforementioned menu).

Disasters range from simple fires or floods to more destructive types, like tornados, earthquakes or even a kaiju-style monster rampaging through your city, provoking all types of explosions. And if any of these disasters strike down, having fire stations helps (a lot) because they’re the ones who put out the fires caused by any disaster (don’t know if they help with the floods too, though).

And, if for some reason you’re bored while playing, you can always activate a disaster to shake things up. However, a disaster might destroy a part of your city and if you’re low on funds to rebuild it, then it’s better to reload a previous save (although the game doesn’t have a game over screen, an empty city with no funds is as close to it as you can get).

But if you can overcome all of this and build an actual metropolis, you’ll realise there’s no actual ending to the game. You can play until your heart’s content and even fill the entire terrain with buildings.

However, if you’re looking for more challenges, you can also play one of 8 scenarios that come with the game. In each scenario, you become mayor of a famous city (San Francisco, Rio de Janeiro, Tokyo, etc.) during a specific time period and have to accomplish certain goals (like fighting crime or saving the city from a disaster or crisis) during a time limit. You have the same options as in the main mode but the city is already built (you can however expand and/or improve it).

Now we’re going to look at the technical aspects. Although the DOS version has both 16 colours EGA and 256 colours VGA/MCGA graphics, the former has a better resolution and therefore it’s the one I recommend. The graphics in either graphic mode are quite good, with very detailed sprites of the larger buildings.

The animation is a bit limited though but for a game of this type, it’s more than enough. The sound effects are very limited and there’s practically no music whatsoever. I recommend using a mouse because this type of UI was specifically made for mouses.

Also, Maxis released some add ons that change the buildings’ graphics to resemble ancient or futuristic cities. It’s a small but cool extra in case you ever get tired of looking at the same sprites. Every posterior version was then released with these add ons already included.

Now we’re going to take a look at the Enhanced CD-ROM version:

This version of SimCity published by Interplay adds a lot of stuff while maintaining the same gameplay, so we’re just going to focus on these extra elements. The 1st thing you might notice is the new animated intro along with better graphics and resolution. There’s also improved and digitised sound effects along with digitised speech throughout the game. Honestly, there’s a speech clip for every option and icon you click and even for the little messages that appear just above the main window, which gets annoying after a few hours of gameplay because they repeat over and over again.

But that’s not all. Apparently, Maxis decided to fill the CD to the brim with not just speech clips, but also with video clips. Ranging from small and random “peek” clips, which are absolutely random and sometimes even bizarre and serve no purpose to the gameplay whatsoever to other longer video clips from your counsellors either asking for more funds or for specific services to be provided. But again, these get tiring after a while because of their repetition. Luckily you can turn off all of these options and I recommend so because they don’t contribute to the gameplay in my opinion and are extremely annoying. 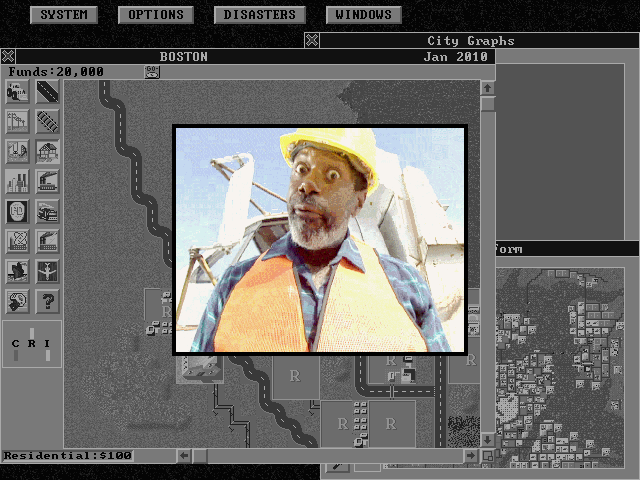 One of the many clips that plague this version.

I also played the Windows 95 version (AKA version 2.0) for this review, but because it had issues with Windows 10, I could only play it for an hour or so. This version UI is perfect to play on Windows because you can increase the windows sizes to your computer’s native resolution and also provide ambient music throughout the gameplay. There are even updated sprites that look better with the updated resolution (although you can always revert back to the original graphics or one of the extra graphic add ons). But the best part is that there isn’t any more annoying sound and video clips.

In conclusion, SimCity might have not aged well gameplay-wise mostly due to how the genre has evolved throughout the years and how the sequels and clones have improved over the original, adding new options and stuff. Still, if you’re a fan of the genre, then you might want to give it a shot just to see how the managerial/city-building genre started. If you’re interested in playing the original DOS version in your own browser, then go here. However, if you’re interested in SimCity Classic, then click here.

I never played any of the other ports, so I can’t make any comparisons. But I do know that the SNES version had some extra stuff, like Bowser as the monster.

SimCity was an instant success among players and critics alike and won several awards. It did not just started the great Sim series, but also spawned several clones and inspired several other games and genres, like the Cities series and even the 4X genre.

In 2008, SimCity‘s source code was released for free under its original name, Micropolis, by Don Hopkins (you can download it here). But if you want to play it in your own browser, then I recommend going here or here.

Well, I hope you’ve enjoyed the review. Next time, we’re taking a look at a game that I’ve been postponing for some time now. Until then, keep on building and playing.