So, the new MCU movie, Captain Marvel, is on cinemas right now and as far as I remember, Carol Danvers isn’t in any video game whatsoever, so I decided to just review a classic sci-fi game set in space. And why not Space Quest II?

Space Quest: Chapter II – Vohaul’s Revenge is a graphic adventure made by Sierra and originally released in 1987 for the Apple II, Atari ST and DOS. It was re-released the following year for Amiga, Apple IIgs and Macintosh.

But as always, let’s first look at the cover:

But it’s time to boot this space sludge:

The game starts with the now familiar Space Quest theme and a text depicting what happened to our protagonist since the events of the first game, namely, that he reaped all the fame he could until he was forgotten by the public and forced to work again as a janitor, but this time, in a space station orbiting his home planet, Xenon.

When starting a new game, you can name the main character just like in the previous game. And again, if you leave it blank, the protagonist will be named Roger Wilco (as we all know, became the protagonist’s canon name).

If you’re played any Sierra AGI graphic adventure, then you know how to play this one. You can use the directional arrows to move Roger and write any commands in the prompt below the main screen. It’s quite simple to use as long you don’t misspell any command. And also don’t forget to write GET OBJECT to grab the several objects you’ll find stashed in certain places or people (an easy mistake to make if you’re not used to this type of graphic adventures).

At the beginning of the game.

The difficulty, however, was rammed all the way up. What do I mean by this? Well, to solve most of the puzzles (some of which are traps BTW), you need to die first in order to figure out what to do, load a previous save state and then use a specific object before encountering said puzzle. For example, you can enter a screen and meet an enemy or a trap that’ll kill you, but if you use a determined object before entering that screen, then you can avoid that enemy or trap, but there aren’t any hints before that. But even with this trial-and-error method, the puzzles aren’t too hard to figure out (but you still need to die to figure it out, though). And well, there are 2 puzzles, however, that’ll really test your patience.

The reason for this increased difficulty might have been the fact that the game isn’t actually very long with just 2 major acts. And the story is quite simple but still effective with the trademark humour common to the series with several references and winks to popular sci-fi classics and even some parodies here and there (although I think the game missed some great opportunities near the end).

Man, five minutes in and your boss is already calling you.

The graphics are good for an AGI title, nothing special but more or less colourful, although personally I’m not a big fan of AGI graphics. The animation is also pretty average although the sprites do look a bit more detailed than in the previous game.

The music is spectacular, especially if you’re playing the game on a Tandy computer (or emulating its sound system), although there aren’t many tracks throughout the game. The sound effects, however, are also average. The control system is okay and the directional arrows are responsive.

In conclusion, Space Quest II might not be the worst game in the series but it isn’t the best one either, due to its increased difficulty, trial-and-error puzzles and small length but it also has the same solid gameplay and humour that made the series a classic. So I recommend it, especially for fans of the series or the genre. You can get it here on Steam along with the rest of series, or here on GOG.com along with the 1st and 3rd titles of the series. 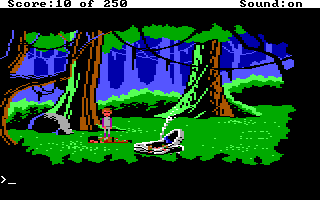 Better not to ask…

As far as other versions go, the Amiga version is just like the DOS version but the Apple IIgs version has superior sound effects (as in all AGI Sierra titles). And there’s even a VGA fan-made remake, made by Infamous Studios, that features a point-and-click mouse interface, voice over and extra content. You can download it for free here.

Well, I’ve hoped you’ve enjoyed the review. And I know it’s not related to the Captain Marvel movie in anyway (or any other movie for that matter), but I just wanted an excuse to replay this game.

Also, I would like to apologize for not making any references to the International Women’s Day. I promise next year to write a special article or review dedicated to it. And for the next review, let’s keep it a bit down to Earth, shall we? Until then, keep on shooting the stars and playing.