Any wrestling fan out there (even filthy casuals like me) knows that in this upcoming weekend is WrestleMania, definitely the most famous wrestling event in the world. And to celebrate such occasion, let’s look at one of the first wrestling games ever made for the PC, WWF WrestleMania (not to be confused with all the other games with the same title).

WWF WrestleMania is a wrestling (duh!) game developed by Twilight and published by Ocean. It was originally released in 1991 for the Amiga, Amstrad CPC, Atari ST, Commodore 64 and ZX Spectrum. It was re-released the following year for DOS.

This game is very similar, graphic-wise, to the arcade game WWF Superstars by Technos, but it doesn’t seem to be a port of it (well, at least officially it doesn’t).

But as always, let’s first look at the cover:

Well, now this is an interesting cover. Of course, you’d have to include Hulk Hogan (on the centre) and the US flag in there, but it’s the inclusion of the British Bulldog (on the right) and the UK flag that makes it interesting. It’s probably due to the fact that Ocean is a British company. And the mean-looking soldier on the left is none other than Sgt. Slaughter, another famous WWF wrestler. Just by looking at the cover, one might think these are the 3 wrestlers we can control in the game, but actually, Sgt. Slaughter is the final wrestler we face in the single-player mode.

But it’s time to boot this sucker, brother!

The intro actually looks good with an equally nice theme. It also shows the 3 wrestlers you can choose: the aforementioned Hulk Hogan and the British Bulldog along with the Ultimate Warrior.

I recommend the Practice mode if you’re not used to this type of game, although the control scheme is quite easy to learn for it’s simply the directional keys and one attack button. The practice mode also doubles as the 2-player mode, but the 2nd player will always control Mr. Perfect, unfortunately. And all the matches are 1-on-1. There are no tag-team matches.

If you choose to compete for the belt and after choosing your wrestler, you’re then taken to a TV screen where your 1st opponent, Mr. Perfect, is cutting a promo. You can then choose between 3 possible answers to your opponent’s taunt, to which then your opponent will respond to. The answers you choose are different to each wrestler and to each opponent, but your opponent will always answer back the same reply regardless. All this promo segments, while faithful to pro-wrestling, doesn’t affect the matches whatsoever.

We’re then taken to the match, which is shown in a side 2D view, with a bottom panel with 2 health bars, a 5-minute timer counting down and the number of credits left (you start with 2 credits).

If you’re used to fighting games, then wrestling games aren’t much different. In this game though, you can move in 4 directions and you can punch and kick the other wrestler. But you also have the ability to grapple your opponent when close to him. But the moment you grapple an opponent, 2 joystick icons appear in each lower corner of the screen. In that moment, you have to wiggle your joystick/gamepad left and right in order to build up a red bar. Whoever fills the bar first, performs a special grappling move unique to each wrestler (although said move doesn’t seem to take more health than the other attacks).

When a wrestler (either you or the opponent) is on the ground, another icon appears, of a finger pressing a button. This icon informs you to press your attack button as fast as possible for your wrestler to get up. While an opponent is on the ground, you can kick him or pin him, although the latter is only recommended with a low health bar.

The less health a wrestler has, the longer it takes for him to get up and the easier it is to pin him. Any match ends when a 3-count pin is performed, the timer reaches zero or any wrestler reaches a 20 second time limit when outside the ring. But you’re only declared the winner of the match if you successfully pin your opponent. 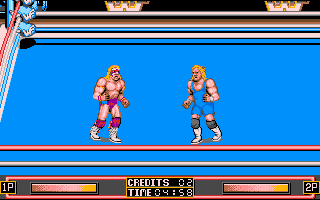 Yes, you can also go outside the ring, but each wrestler can only stay there for a maximum of 20 seconds. And outside the ring, you can find and grab chairs to use against your opponent (in fact, it’s the best attack due to its fast rate).

Any wrestler can also climb a turnbuckle to jump on the opponent (or against the ropes) or even run towards him for more attacks (although again, they don’t seem to deal more damage compared to a normal punch or kick). But careful though, because running attacks can be countered.

After winning a match, your opponent returns to the TV screen for one last taunt and he then moves to the next opponent. To win the WWE Championship, you need to defeat a total of 5 wrestlers: Curt “Mr. Perfect” Hennig, The Warlord, “The Million Dollar Man” Ted Dibiase, The Mountie and finally Sgt. Slaughter, presented here during his controversial Iraqi sympathizer heel phase. It would be great if you could also face the other 2 wrestlers you didn’t choose.

Now to the technical aspects. The graphics are okay and although the sprites are big, they’re also ugly and the animation is awful. The sound effects are also bad, but the music theme is good (although there’s no music during the matches). The controls, either keyboard or joystick/gamepad, aren’t very responsive and you’re going to lose the grapple wiggle a lot of times.

In conclusion, WWF WrestleMania isn’t a good game. It has a hard difficulty setting and the controls, while intuitive, aren’t very responsive which makes the game unnecessarily harder. And there should also be more wrestlers available, not only to choose from but also to face and more variety of moves and attacks (you can’t even do irish whips). In other words, I can’t recommend it, not even to wrestling fans. But if you want to try it, then go here to play it in your own browser.

The Amiga version, although having better music (but worse sound effects), is equally bad in all other aspects. The other console and arcade titles with the same name are different games made by different companies, so I won’t even mention them in this review (although the ones I played are definitely better).

Well, what’s your favourite wrestling game? Tell me below in the comments or on our social media. Till then, enjoy WrestleMania 35 and keep on playing, brother!