Well, it isn’t too hard to figure out which Bullfrog game I’ll start reviewing for this retrospective. And it’s only fair that I start with Bullfrog’s first and possibly biggest success ever: Populous.

Peter Molyneux came up with the initial idea of Populous first by watching Glenn Corpes’ work and then by experimenting with the AI, in which small sprites (called “peeps” by Molyneux) travel through the land until they encountered water. And then, after increasing and reducing the terrain into flatland, the peeps were programmed to build houses that would grow in size the more flatland would be available to them. To help the team visualise the gameplay, they used LEGO blocks.

But before looking at said gameplay, let’s first look at the covers, shall we?

This is the first and most famous cover and I have to say that it’s a good art rendition of the game itself. While it doesn’t give the players nearly any indication of what the game is really about, one can’t deny that it’s visually striking, to say the least.

Now this cover is a bit more ominous, but it also conveys what the game is about more properly than the previous one, I think. I simply wish it had more elements to it, though.

This is the US SNES cover and it’s just a poor man’s version of the original cover. They tried to make it more compelling to convey action, but as you’ll see, Populous is anything but an action game. 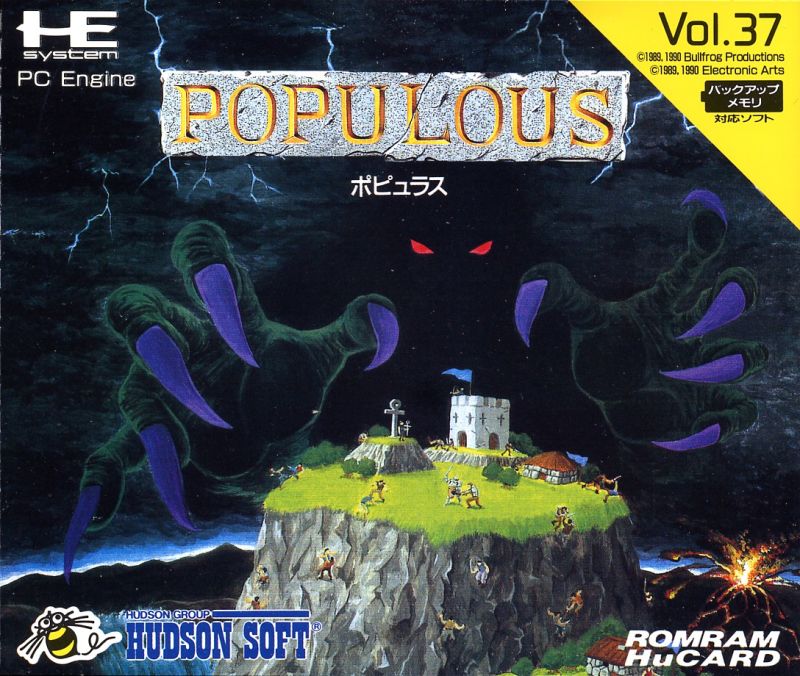 This is the Japan PC Engine cover and while it’s better and more faithful than the previous one, it still tries to convey a bit of action, although I do like the ominous background.

But let’s finally boot this sucker, shall we?

The game doesn’t have a story per se. You’re simply a god-given a few followers and your objective is to make your followers grow enough so they can kill the other god’s followers and conquer the world they’re in. Pretty simple objective, don’t you think? Well, it’s in the execution that you’ll find the core gameplay.

In the title screen (that features 2 angry guys, one blue and the other red, locked in a staring contest), you have 3 options to choose from: Tutorial (where you can go through easy levels just to get the hang of the gameplay mechanics), Conquest (the single-player mode, where you have to conquer more than 500 levels or worlds, as the game calls it) and Custom (where you can design a level, customise all the options, even the AI, or simply play a multiplayer game through a modem).

Sometimes this fellow appears and starts shitting mountains across the map.

But whatever the mode you choose, you end up in the main gameplay screen where you have an isometric view of the current world in the centre, a book in the upper left corner that shows an overview of the world, an horizontal scale, a coat of arms in the upper right corner that shows your mana level and the followers’ info and several icons in both lower corners, the left with your commands and the right with the game’s options.

Although the icons are all pretty self-explanatory and the gameplay is somewhat intuitive, I still recommend reading the manual before playing to get a good idea of each icon and its function.

Every time you finish a level, this fellow appears and challenges you to conquer a new world.

To deter the other god’s followers, you have access to several natural disasters, ranging from creating inhospitable swamps to flood large portions of the map, but the most powerful the calamity, the more mana it needs to invoke it. And the more followers you have, the more mana you’ll get. Also, you need to be careful that you won’t hurt your own followers when invoking catastrophes.

Also, the first levels all occur in green areas, but later on, you find yourself playing in snowy, desert and lava environments. In fact, the more inhospitable is the environment, the harder it is for your followers to grow and expand. And the 3 expansions, The Promised Lands (originally released in 1989), brings 5 new landscapes and 500 new maps, The Final Frontier (also released in 1989, but only for the Amiga and Atari ST), bring 1 new alien-looking landscape and even more 500 new maps and the World Editor (released in 1991 only for the Amiga) allows you to build and edit your own worlds.

From The Promised Lands: welcome to the Wild West. No giant mechanical spider included.

But it’s due to the high number of levels (even counting the expansions) that it’s almost impossible to actually finish it. And although the console versions have an ending of sorts, the computer version simply repeats the same animation after finishing each level.

Populous is one of those games that simply repeats itself (but harder each time) until the player is satisfied or until he/she stumbles on a really hard level. So, there isn’t any actual ending to the game per se.

But on a technical level, the game is undoubtedly pretty, with colourful graphics, despite the sprites being quite small. The animation is also pretty good, although natural disasters could benefit from better animation.

The sound effects could also be better but are important to the gameplay (as a warning to the AI’s actions). The title theme is quite good (especially through a Roland MT-32 sound card), but it’s the only musical theme on the entire game. And if you decide to play with the music on, it plays over the sound effects for some reason.

Maybe building a wooden house next to a river of lava, might not be that bright…

In conclusion, I found Populous a bit repetitive (although the expansions do bring some variety, despite being only the cosmetic type), but the gameplay is without a doubt addictive because I always end up trying to fill the entire map with my followers and it’s a time-consuming game, meaning that before you know it, you’ll end up playing it for several hours without realizing it. So, despite not having aged all that well, I still say to give it a shot, especially if you enjoy these type of games.

Regardless to say, that for bringing such innovation to the managerial/strategy genre, Populous was a groundbreaking commercial and critical success, so much so, that Bullfrog and Peter Molyneux became famous almost overnight.

The “God genre” (as Molyneux himself coined it) became extremely popular and influential, especially to the 4X genre and to Sid Meier’s Civilization series, among others.

Bit Land from The Promised Lands. Probably my favourite landscape.

It even spawned 2 sequels (Populous II: Trials of the Olympian Gods and Populous: The Beginning), which we’ll review at a later date.

It was remade for the Nintendo DS in 2008 by XSEED Games (simply titled Populous DS) and it also had two spiritual sequels: Molyneux’s Godus (which the lesser said about it, the better) and Reprisal Universe by Electrolyte and Last17 and originally released in 2012.

So, where can you get your hands on Populous? Well, you can buy it here on GOG.com (along with its 1st expansion The Promised Lands).

Anyway, did you enjoy our 1st review into our Bullfrog retrospective? Well then, be sure to stay tuned because next time, we’ll be taking a look at one of my personal favourite titles made by Bullfrog. Until then, keep on creating more flatland and on playing.