Now, we’re just upping the ante, aren’t we? Still, it’s impossible to make a Bullfrog retrospective without mentioning another critical and commercial success, which is perhaps their most colourful game that also begun its own influential series. I’m talking about Theme Park.

Theme Park is a managerial strategy game developed by Bullfrog and published by Electronic Arts. It was originally released in 1994 for the 3DO, Commodore Amiga, DOS and Macintosh. The following year, it was ported to the Amiga CD32, FM Towns, Genesis/Megadrive, Jaguar, PC-98, Playstation, Sega Mega-CD, Sega Saturn and SNES/Super Nintendo. In 2007, it was remade for the Nintendo DS and in 2008, that remake was ported for the Playstation 3 and PSP and in 2012, it was ported for the PS Vita. In 2013, the original version was re-released for Windows and Macintosh. There’s also an iOS remake with microtransactions which was released in 2011, but it wasn’t as well received (Gee, I wonder why…)

Whew, Theme Park might just be Bullfrog’s most ported title. But, like always, before we take a look at the game itself, let’s first look at the covers, shall we?

This is perhaps the most famous cover and it’s quite adequate for this game. It could perhaps show more on the background, but you really don’t need anything else.

If you remember my Populous review, this cover looks very familiar, doesn’t it? It’s a lot better than the original cover and it’s not only more colourful but also conveys better what the game’s about. 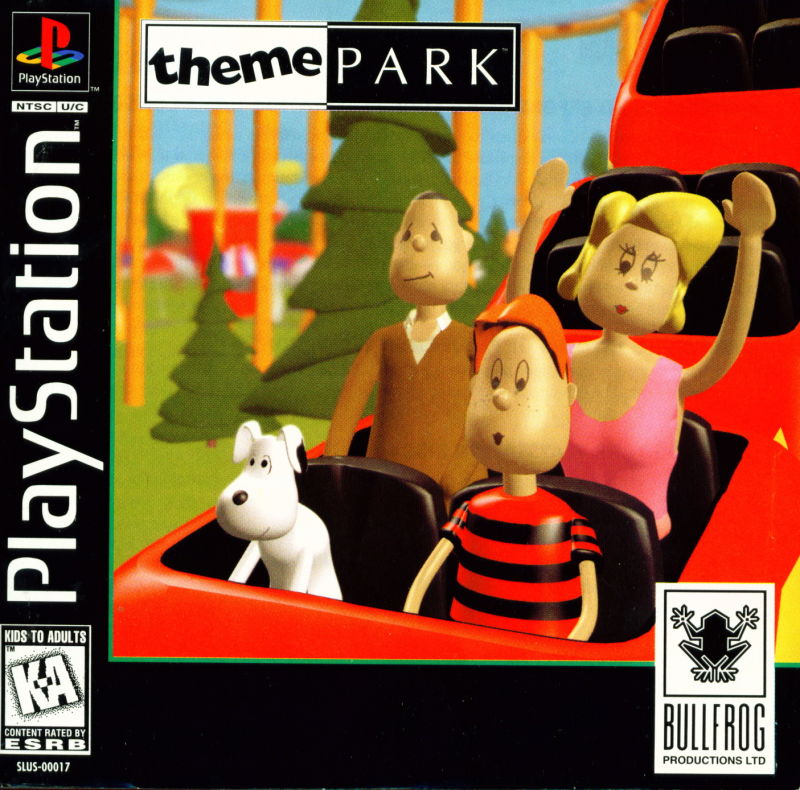 Now I know this one’s just a image taken from the CD-ROM intro but it’s better suited for the cartoony and comedic look of the game. It’s perhaps not as busy as the previous cover, but I like it. 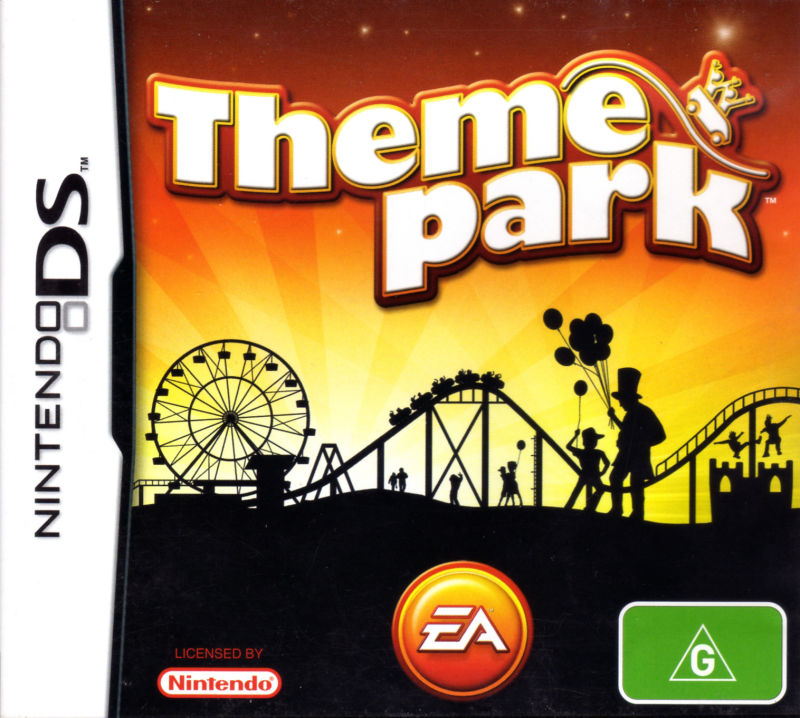 Meh! Although truth be told, the design isn’t that bad, but it could definitely use more colour.

And now, let’s boot this sucker into the roller coaster, shall we?

The intro is from the CD-ROM version of the game and between the eerie music and the Willy Wonka lookalike, it feels like the beginning to an horror animated movie. And that hole at the end of the roller coaster? Believe me, it goes straight to Hell!

The menu screen could use a bit more work. It reminds me a bit of Syndicate and it really shouldn’t. Perhaps a rounder font would have been better suited.

When starting a new park (and game), you have quite a range of options to customise your gameplay: from the park’s name, to the difficulty levels and more. Your gameplay can be just focused to build and customise theme parks or it can have a lot more depth in the several managerial options (like buying stock for your stores, negotiating your employees’ wages or researching new rides and attractions).

The fact that you can make your gameplay more or less complex, just brings a whole new level to the game itself, as it caters to both casual and hardcore strategy players alike.

In building your first park, you have no other option than to start in the UK, because you don’t have any money to buy lands and there, it’s free. At the beginning, you only have a few rides and stores to build. You unlock the rest as you play along or research for it (depending on the type of gameplay you chose).

You even have the option of a mini-tutorial which explains the basic game mechanics. But to properly understand the more complex mechanics, I recommend reading the manual first.

You also have to hire employees to manage the rides and stores, including handymen to fix broken rides, mascots to entertain the public and janitors to keep the parks clean, among others.

Every now and then, a new screen pops up and you have to play a minigame in order to negotiate the employees’ wages with their representative. Also a small hint: make sure to program your janitors’ routes to make sure they actually clean the entire park.

The very start of the game.

But not only do you build and decorate the park, you’ll also have to micromanage every little aspect, like the ride’s efficiency, the tickets’ prices, the shops’ stocks, services, etc. And when building the big rides, like roller coasters, you can customise its length and altitude to your liking (even create unrealistic rides that would be too dangerous in the real world). The objective is to make sure that your park’s visitors always have a good time and leave satisfied (and hopefully, also with their wallets empty).

You’ll also have to keep an eye in the stock market to make sure your stocks are high or else, one of your competitors can make an hostile takeover of your park. But these options are only available in business mode.

And after a few years, you have the option to auction your park for a hefty sum of money (if the park was successful) and start in a different country, whose location and land price determine the difficulty in building and managing a new park.

This is just a light review of the game mechanics, because Theme Park in business mode has a lot more depth and micromanagement to it, but because it also has the other 2 modes, it doesn’t scare away players who aren’t very good with this particular genre, making Theme Park a great introduction for it.

Technically speaking, the game has good graphics and very colourful sprites and animation. You can even change the resolution ingame, but I don’t like the bigger resolution all that much (it makes the sprites very small, although it increases the view). The music is very obviously upbeat and the sound effects are also very good (although you’ll get tired of a particular sound sample).

You can build your Roller Coaster any way you like.

So in general, I have to say that Theme Park is a very deep managerial game, but also very customisable, which is great for both beginners and veterans of the genre. If you want a fast and casual game, you have that option; but if you want a deep, slow micromanagement simulation, you also have that option. In other words, I highly recommend it, whether if you’re a fan of this genre or simply want an easy introduction to it.

Theme Park had an enormous success with both players and critics alike and spawned a successful series. Its direct sequel might have taken on a different direction (Theme Hospital), but it came back to its original theme for the rest of the series. It also inspired the RollerCoaster Tycoon series. You can find Theme Park here at GOG.com.

So here ends our Bullfrog retrospective. I know some of you were expecting a Dungeon Keeper review, but like I said before, my work took a lot of my free time. But don’t worry, I promise to review it some other time. Anyway, I hope you’ve enjoyed this retrospective and hopefully, there’ll be more to come. See you guys around and until then, keep on playing.