Well, this retrospective sure is going slow, isn’t it? Sorry for taking so long, but because of recent work issues, I no longer have a lot of free time. And it happened all of a sudden, without notice, so I couldn’t cancel anything or plan around it.

Anyway, today’s review is probably of my favourite Bullfrog title (apart from Theme Hospital and the original Dungeon Keeper, that is): Syndicate.

Syndicate is an action/strategy game developed by Bullfrog and published by Electronic Arts. It was originally released in 1993 for Amiga and DOS. It was ported the next year for the Macintosh, Genesis/Megadrive, SNES/Super Nintendo, FM Towns and PC-98. In 1995, it was ported to the Sega CD, Super Famicom, 3DO, Amiga CD32 and the Jaguar. There was apparently an Acorn Arquimedes and a PSP port also, but I couldn’t find any information about them.

This is the European cover and I have to say that it looks cool, with a green map (that kind of looks like a computer schematic at 1st glance) and a futuristic looking image of a trench coat ninja in a Blade Runner-esque city background. I simply wished that the left image was bigger, like in the Jaguar cover: 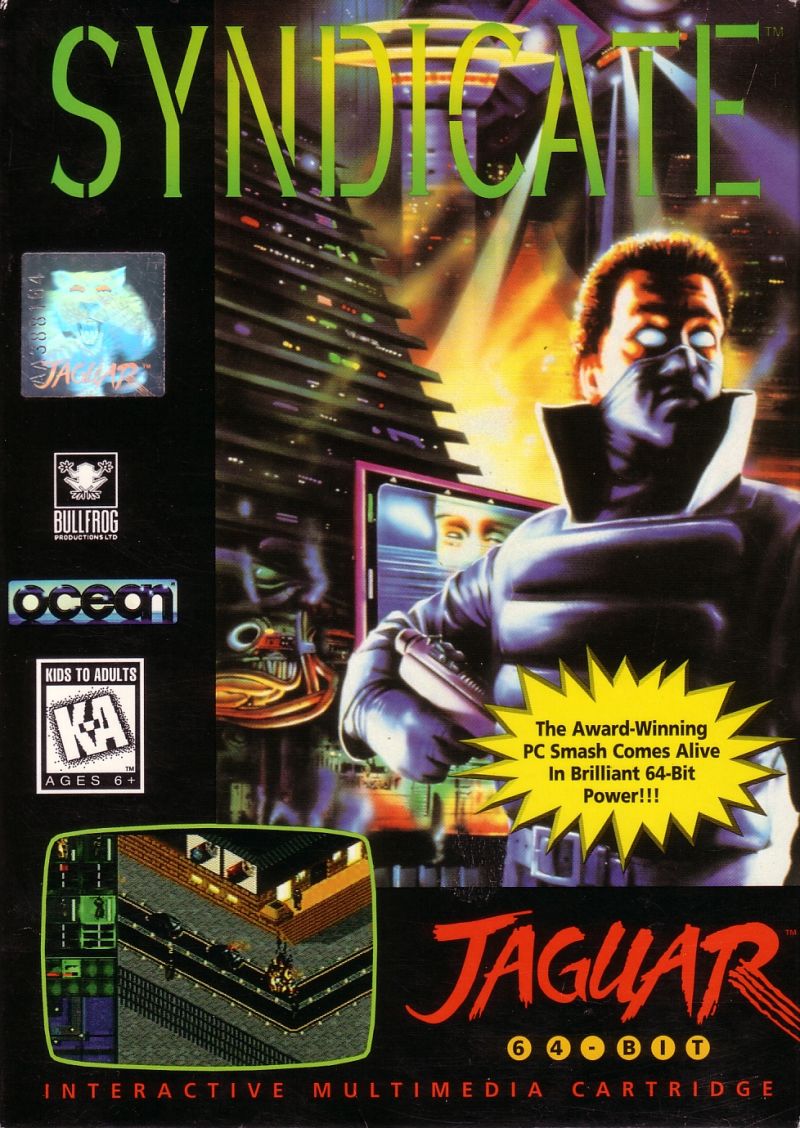 Apparently in the future, Youngblood’s Disease will become an epidemic!

Very nice, but the US cover is even better IMO:

This is definitely my favourite cover. It really conveys the cyberpunk atmosphere found in the game. And the back cover is equally awesome: 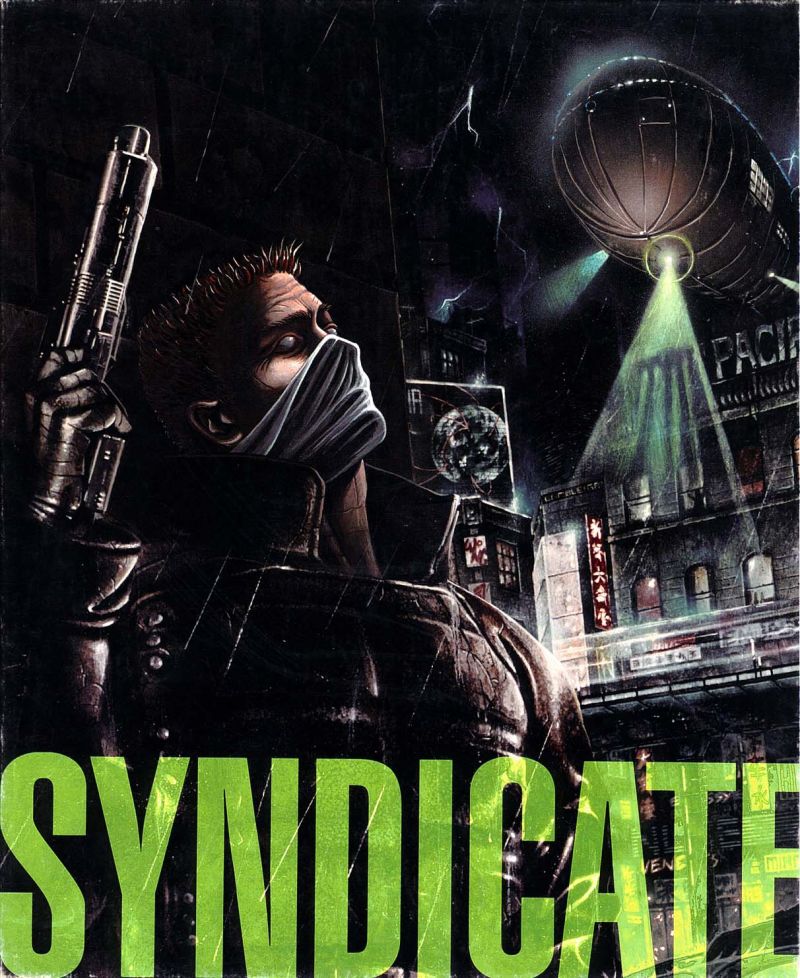 This could perfectly be a comic book cover. And I would buy it.

But it’s about time we boot this sucker, isn’t it?

The intro’s really stylish and it definitely looks like something out of Blade Runner, but it doesn’t explain well the game’s backstory: you play as an upstart executive of a multinational corporation in a dystopian, cyberpunk future, whose objective is basically to conquer the world through several missions using cybernetic agents, which you’ll directly control on said missions.

The manual gives a more extensive background story, but basically what I just wrote in the previous paragraph is all the background you really need to know. Still, for those who like cyberpunk fiction, it isn’t a bad read.

You can start by customising your company name and logo (although the later doesn’t have many options) and then start your 1st mission in Western Europe. But before doing so, I suggest spending some of your initial money either upgrading your agents with cybernetic body mods, buying them better weapons or investing on research for better mods and weapons. You can even choose how much money you want to invest on research. The more money you invest, the quicker it’ll be finished.

When choosing a mission, you can even spend money to get more information about the objectives and/or a more detailed map, which can be helpful in the later and harder missions.

There are few types of missions, but the most common ones are: assassination (where your agents need to infiltrate a certain place to assassinate a target), urban assault (where basically your agents need to eliminate all the other companies’ agents), persuasion (where at least one of your agents needs to equip a Persuadertron, use it on a specific target and bring them unharmed to a certain location for safe extraction), among others. The later missions are not only harder, but some even have a time limit to finish them.

Every time you finish a mission, you end up conquering the region where said mission occurred and you can even raises the taxes on it. But be careful, if the population of that region rebels against you due to high taxes, you’ll have to repeat its mission (which can be a pain in the ass if it was a particular hard mission, but a blessing if it was an easy one).

For each mission, you can choose up to 4 agents to control out of an initial number of 8 in your company’s cryo chamber. If you lose all your agents (including those in the cryo chamber), then it’s an automatic game-over. But you can always recruit new agents using the Persuadertron on civilians or guards.

While controlling the agents on the field, you can manipulate their IPA levels. IPA stands for Intelligence (the green bar), Perception (the blue bar) and Adrenaline (the red bar). You can inject drugs through your agents’ cybernetic chip by moving said bars to the left or right. Each direction you move the bars has its benefits and disadvantages, e.g.: moving the red bar to the right will make your agents run faster (and if they’re equipped with the legs mods, even faster) but at the expense of health regeneration; while moving it to the left will increase your agents’ health regeneration, but they’ll move and act slower. I highly recommend reading this part of the manual before playing because it can be the key to finish a hard mission successfully.

After winning a mission.

This is practically all you need to know about the core gameplay, which it’s more or less intuitive. But how about the technical aspects? Well, graphically the game looks awesome, with the initial menus looking like something out an 80s futuristic computer interface.

But the missions’ graphics are even better. While playing the missions, the game changes to a better resolution with better graphics and colours than the menus, using an isometric view. The characters’ and the buildings’ sprites, although being very small, are very well detailed. All the cities look like they were taken directly from Blade Runner with huge screens on the buildings and oppressive dark textures.

These visuals along with the soft techno music gives a proper cyberpunk atmosphere. Bullfrog’s developers really did their homework on this one and props must be given where it’s due. The aforementioned techno soundtrack is quite good with the slow beat speeding up everytime an enemy agent appears (which can be used as a warning sign).

The sound effects are equally great, especially the voices, the sound of the weapons being fired and the explosions. The control scheme is exclusively through mouse (except in the console versions, of course) and with a good mouse at hand, you won’t have any problems playing the game.

“He’s got the whole world in his hands”.

The only drawbacks I can think up are really more nitpicking than anything else, but I don’t like the fact that you can’t see inside the buildings. Luckily your mini-map (and the scanner item) can be useful in that regard. And you can’t change the camera’s perspective and angle (which was solved in the sequel).

Also once you deplete a weapon’s ammo, you might as well drop it and pick up another because there isn’t any ammo anywhere in this game to grab. But despite all these small drawbacks, this game is lots of fun and still one of my favourite games to play and needless to say, I highly recommend it.

Apparently the Sega and Nintendo ports have different levels with similar gameplay, but I never actually played those, so I can’t really judge for myself. If someone played them, feel free to post your opinions of them in the comments section.

If you want to buy a full-functioning copy of Syndicate now, you can buy it here on GOG.com (it’s called Syndicate Plus because it’s bundled with the expansion American Revolt). But you can also play FreeSynd, an open-source engine recreation, free of any charge (but you’ll need a copy of Syndicate in order to use it).

After killing a guard.

And talking about the expansion: American Revolt was released in 1993 only for the Amiga and DOS and features new missions, weapons and even introduced multiplayer gameplay. But unfortunately due to the lack of time, I couldn’t play it and so, I’m forced to postpone its review to a later date. Maybe one day I’ll feature a month just to review expansions, who knows?

Syndicate gained a sequel, Syndicate Wars, a few years later (another review for another time) and a FPS reboot also called Syndicate in 2012 by Starbreeze Studios, which wasn’t well received by both the players and critics alike.

But in 2013, a spiritual sequel called Satellite Reign was successfully crowdfunded through Kickstarter, which prompted its release in 2015 by 5 Lives Studios among several accolades and awards by the critics.

I hope you’ve enjoyed the review and again I apologise for being late. Hopefully, this upcoming week, I’ll get less workload, which will free up some time for playing and reviewing. But since the month isn’t over yet, there’s still time for at least 1 more review for this retrospective. So stay tuned and until next time, keep on playing!