Sometimes there are games out there that seem simple enough and then hardly make more than a blip in the radar. But sometimes those same games get noticed for other reasons outside the game itself and might end up developing a cult following, or even sometimes they’re successful in one country but are hardly noticed in another country. Not to mention how much the game was influenced by and how much it influenced other games afterwards. Today we’re going to take a look at one such odd game: J.B. Harold Murder Club.

J.B. Harold Murder Club is an adventure/mystery game originally developed and published by Japanese company Riverhill Soft for the PC-88, PC-98, Sharp X1 and the FM-7 computers in 1986. It was released again in 1988 for the MSX and Sharp X68000 and in 1989 for the NES. It saw its first remake for the Turbografx-CD in 1990 and translated and brought to the US the following year for the same console, while the original version was released in the US for DOS that same year. The remake was again released (in Japan only) for the FM-Towns in 1992 and for Windows in 1996. A second remake was made for the Nintendo DS in 2008 under the title Keiji J.B. Harold no Jikenbo: Satsujin Club.

But first, let’s take a look at the cover, shall we?

No, this isn’t a Casablanca adaptation, although that would be cool

The cover definitely has a very noir feel to it, with the gun and the detective smoking in the background. A bit generic nowadays, but not a bad cover for a mystery title. And because of all the other covers being variations of this one, there’s no real reason to show them.

But it’s time to boot this gumshoe:

The intro is simple and gets to the point: a wealthy businessman named Bill Robbins was found dead and it’s your job as a police detective to find his assassin and bring him or her to justice. And although they aren’t bad, I wish the intro screen showed more than some woman’s legs. But the intro theme is surprisingly good and pumps you up for the game.

The game starts in your office where your secretary, Catherine, encourages you to give your best in solving the case. And from there you can go out to investigate by interviewing the witnesses and the victim’s friends and relatives. And I hope you’re still pumped from the intro theme because that’s the only piece of music you’ll hear until the end. That’s right, there’s no music throughout the entire game, only at the intro and ending.

The gameplay consists of choosing a command from a list situated at the right of the screen, with the text appearing at the bottom. From the command list, you can choose your destination (when travelling) and other options when interviewing people or searching for clues, with the main view showing the places and people through still images.

You’ll have to constantly return to your office, either to request warrants from the prosecutor, interrogate suspects and present clues to the crime lab, but it’s also the only place in-game where you can save and load games and check your progress.

With still images, several lists of commands to choose from and no music whatsoever, the gameplay quickly becomes very monotonous, especially since you need to trigger specific dialogues and events, which then prompts a lot of backtracking to the same locations or people for new dialogues and clues. You can’t even get search or arrest warrants until you get a specific clue or dialogue that might be or not related to a specific suspect. 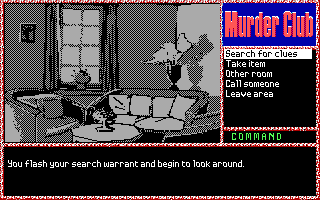 Time to get cracking. Those pillows look suspicious

Also, there’s so much information to discover that unless you have a superb memory, I recommend taking notes about everything and everyone, to not get lost in the middle of the investigation.

And that’s not the worst of it. First a little spoiler warning:

Near the end, you might get a good idea of who the killer is, but he/she won’t confess until all other suspects confess their own crimes and/or motivations. Only after gathering and fully investigating all the evidence and clues and getting confessions from all the other suspects, does the killer finally confesses the murder.

OK, spoilers over! Back to the review.

Although this version of the game was released in 1991, it has the EGA graphics and sound of a late 80s DOS game (because that’s when the game was made). And the art style is very westernised, just like the rest of the game. If I didn’t know, I would swear this was a western game, based only on the graphics and story. And also because the game uses still images, it has virtually no animations whatsoever.

And the mystery itself is actually well written, albeit quite cliché. In fact, it uses most of the basic mystery tropes, including the fact that the victim was an asshole, thus increasing the number of suspects with motivations to kill him. But the final twist when solving the case is actually quite good. 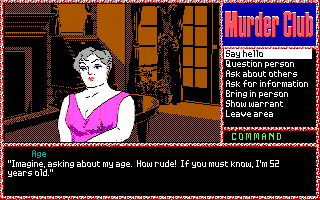 So, apart from the mystery itself, this game is quite monotonous to play, with a lot of repetition and backtracking. But I won’t deny it has good dialogue and most of the characters are interesting. So if you have lots of patience and love mystery titles, you might want to give it a shot, but I can’t really recommend it to casual players.

The Turbografx-CD version has better graphics (but still including digitised images), a great intro with good animation, voice-over acting, some extra screens and music throughout the game, although it still has the same boring gameplay. But now with the music, it’s a bit less monotonous. I have no idea about the Nintendo DS remake, though.

The Turbografx-CD version had more success than the DOS version, not only because of the above but also due to a little controversy that made it a bit infamous: at the beginning of the game, there’s a mention of an unsolved rape case. Now, that doesn’t seem a big deal nowadays, but since console games were originally targeted to children and teens (unlike most computer games) and also because there wasn’t any mature warning in the game’s box, you can see why it raised some eyebrows. IMO, the rape case was an attempt to make the game look more dark and gritty, but the developers might have second thoughts about it because it’s hardly mentioned again throughout the game.

“And I mean all of your steps”

Still, even with this controversy, the game was quickly eclipsed by other mystery titles, like the Sherlock Holmes series. However, it had great success in its native Japan, because not only it had 2 remakes, but also 4 sequels. It also developed some cult following here in the West, enough to release an iOS version of the 2nd game in the series, Manhattan Requiem. And if you’re interested in trying it out, you can play it here in your own browser.

The J.B. series was also responsible for influencing the visual novel genre, which has been quite popular in the East for many years and has recently become popular here too in the West. So, despite being mostly forgotten by now and aged very poorly, one can not deny the influence that Murder Club had in some modern titles, especially in dialogues and character interaction.

So, what are your favourite mystery games? Tell me by commenting below. Next time, I’m going to do something a bit different with a game everyone knows, and I mean everyone! Till then, keep on playing.