2 years ago, a new tradition began around Christmas, but it doesn’t have anything to do with it. I’m talking about the new Star Wars movies, which are now released around this time. And I decided to review a Star Wars game along with them (I tried to review one last May 4th, but I didn’t had the time and my laptop was broken). Last year, I reviewed the 1st title in the Jedi Knight series, Dark Forces. But this year, we’re going to take a look at the 1st Star Wars game ever released for the PC: the DOS port of 1983’s Star Wars.

I know what you’re thinking: according to my own review guidelines, I shouldn’t review arcade ports, BUT, if you read them carefully, if any game that was released originally in the arcades or consoles, had a computer port released right after (to a maximum of 3 months) is eligible for review. And since the arcade version of Star Wars was originally released in May 1983 and the Commodore 64 version was released in August 1983, that makes it JUST BARELY eligible for such. Why? Because it means that both the original version and the port were made roughly around the same time.

But before taking a look at the game, let’s look at some of the covers, shall we? 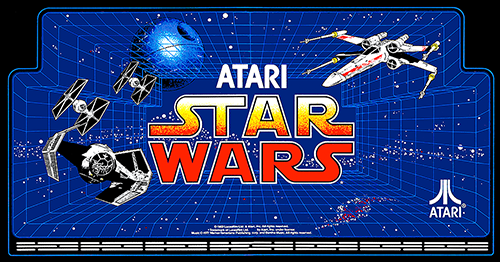 I haven’t seen Episode IV in a while, but did it had blue lines in space?

This is the original arcade marquee and it looks cool for the time, with the blue lines as a remainder of the vector graphics found on the game (I blame Tron for that association). 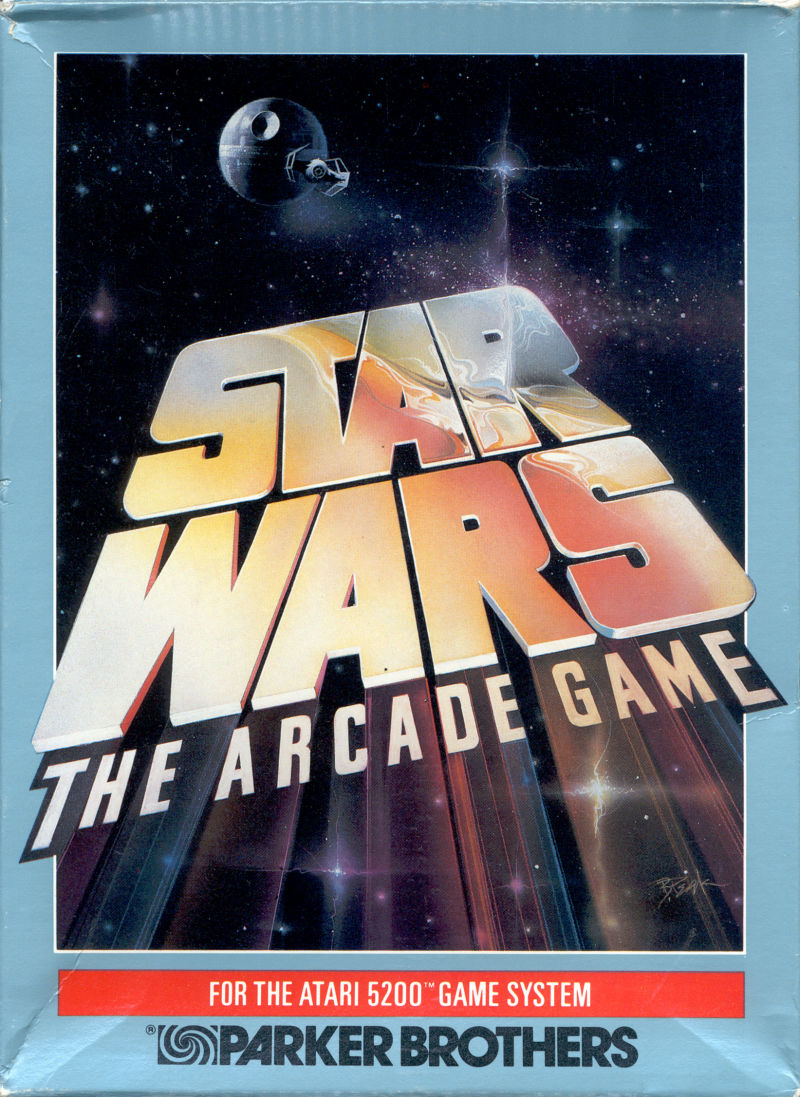 “Umm, Sir? It appears some giant words are approaching the Death Star.”

This the 1983 cover and while it doesn’t show much, it’s still very well designed and it looks like the Star Wars’ logo is flying towards the Death Star and the TIE-fighter in the distance.

We still miss you, Princess Leia.

This is the 1987 cover and it’s simply a recreation of one of the original movie posters. It isn’t bad, but all these characters don’t even appear in the game (well, you’re playing as Luke Skywalker, but in a 1st person perspective). 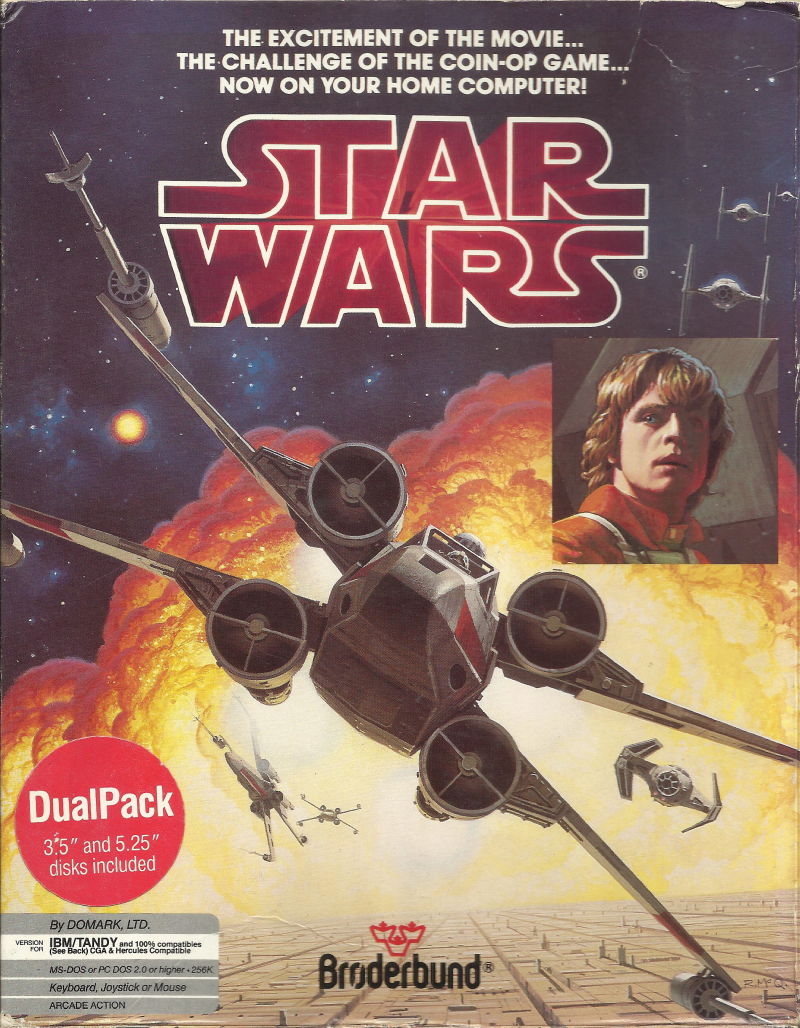 A top contender for the best sci-fi cover ever.

This is the 1988/1989 cover and it’s probably the best one, with the X-Wing and TIE-Fighters in front of an explosion and a picture of Luke on the side (implying you’re playing as him). This cover would inspire later covers featuring X-Wings, be it books, comics or other games.

But before we get into the game itself, let’s just take a small look at this TV ad for the console ports:

This has to be the most enthusiastic gamer I’ve ever seen! If he ever plays with a VR set, his mind might explode!

Now finally, we can actually get to the game:

1st, I hate the title screen. It’s as unoriginal and uninspired as it gets. And 2nd, there isn’t any scrolling text nor the Star Wars theme in it (in fact, there isn’t any music whatsoever). How can there be a Star Wars game without these 2 things?! And I hope you’re familiar with Star Wars (at this point, who isn’t?!) because the game just throws you into the action without any introduction or explanation. But then again, it’s just the Death Star battle from A New Hope.

I didn’t know that the Empire made more than 2 Death Stars!

You start the game with 9 shields, meaning you can only get hit 10 times. However, every time you finish a level (or wave, as the game calls it), you’re awarded an extra shield (but never beyond 9) and the next wave gets harder and more complex (with more enemy ships and obstacles). Yes, the game is rather small and hard (since there aren’t any continues), but then again this type of arcade games were made specifically to munch quarters, but the difficulty could have been reduced while porting it to home platforms.

The graphics and animation are superb, even with the reduced number of colours. In fact, if it wasn’t for the lack of colours (and music), it could almost be considered a perfect adaptation. And the animation is very fast and fluid when playing on Dosbox. Reducing the number of cycles might be recommended for beginners, but in my opinion, this game plays better with an number of cycles from 1500 and above. However, in the surface section, if there are too many towers on screen simultaneously, it tends to slow down the game a bit. But it still remains playable and enjoyable.

The control schemes available are by keyboard, joystick or mouse. The keyboard controls are okay but there are better options. The joystick and gamepad controls are better, although I recommend a joystick over a gamepad, because of the reverse up/down controls (the up arrow actually throws the crosshair down, like in a flying sim), although you can always reverse them. The mouse controls are very fluid and tight, making it the best control scheme (and without any reverse controls). The biggest sins, as I have mentioned before, is the total lack of music and the sound effects are mediocre at best.

But this is still a faithful conversion (except in the sound and music departments) and if you’re a Star Wars fan, then I recommend it. Although it was quickly eclipsed by other games, Star Wars is still considered one the best licensed arcade games of all times and would later inspire the X-Wing and Rebel Assault series, among others. It not only left a mark in Star Wars history, but in videogame history itself. And you can enjoy it here, in your own browser.

“Use the Force, Luke”

So, did you ever played Star Wars or any other game of this franchise? If so, tell me below in the comments, in our Facebook page or on our Twitter feed. I know that this was a very small review, especially with this thematic. But I promise you all that I’ll make an effort to review more Star Wars games from now on. Until then, keep on playing and may the Force be with you!