Well, the problem with the Star Wars game I reviewed a few weeks ago, is that it left me wanting for more Star Wars action. And although I did enjoyed The Last Jedi, it simply wasn’t enough. So, taking a closer look at my Steam list, I found a game I tried to play unsuccessfully in my laptop about a month ago (but successfully in my new desktop, fortunately). And it had everything I’m looking for in a Star Wars game. I’m talking about Jedi Knight.

Star Wars: Jedi Knight Dark Forces II is an FPS made by LucasArts and originally released in 1997 for Windows PC. It was re-released in 2001 in budget format and digital format in 2009 on Steam and in 2015 on GOG.com.

However, this will be a review of the single-player campaign only. It’s very hard nowadays to play the multiplayer matches online. Also, I won’t be reviewing the expansion, Mysteries of the Sith, because it’s quite a large expansion. But don’t worry, it’ll have its own review at a later date.

But, as always, let’s first take a look at the covers: 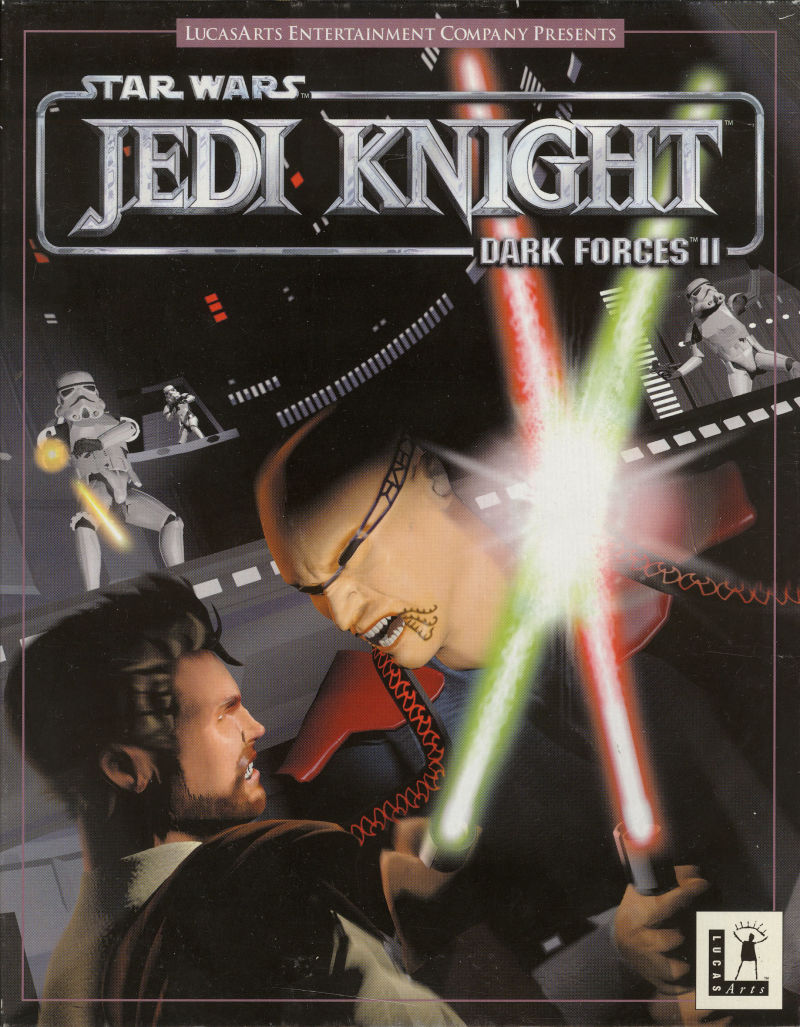 I won’t deny that this is a great looking cover, with our protagonist, Kyle, fighting a Sit… sorry, a Dark Jedi, with some Stormtroopers in the background, trying to shoot him. This cover also gives us the first hint of one the game’s new features: lightsaber duels.

The budget release also had its own cover: 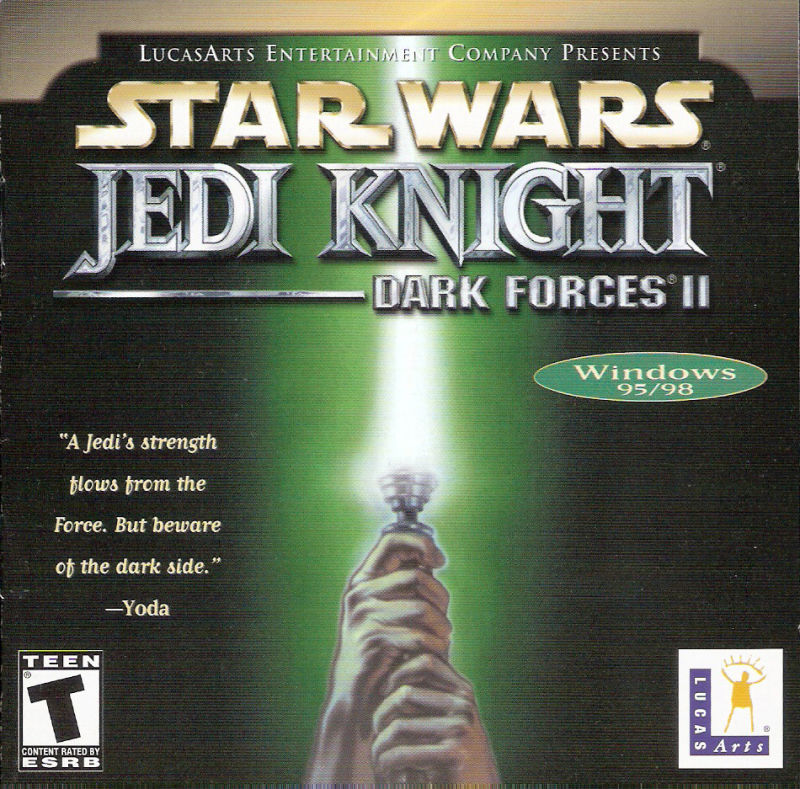 Just a couple of hands holding a green lightsaber alongside a Yoda quote. Nothing special about it, honestly. But again, highlighting the lightsaber as a playable feature.

As you can see, you again play as Kyle Katarn, after the events of Dark Forces (and Return of the Jedi), discovering that his father was killed by Jerec, a Sit… sorry, a Dark Jedi who’s looking for the Valley of the Jedi. So, it’s basically a revenge story, but in the Star Wars universe. With lightsaber duels. Said like that, it just sounds awesome. But, is it really?

The game takes everything what was awesome about Dark Forces and builds upon it. Adding better graphics and textures, new weapons and the possibility to wield a lightsaber and Force powers. In fact, depending on your actions and the type of powers you choose (either defensive, offensive or movement), you can end up becoming either a Jedi or a Sith, which will influence the story and the ending.

Favorite weapons from the previous game, like the Stormtrooper rifle and the Repeater are back, along with new weapons, like the Bowcaster and the aforementioned lightsaber. The Bowcaster might have a bad rep among gamers, but I personally liked it as a long-range weapon and the lightsaber is possibly the best short-range weapon ever! I mean it, using the lightsaber is extremely easy, with Kyle automatically deflecting any shots directly in front of him, as well as using the directional arrows for different strikes and attacks. And coupled with the Force powers, it just makes Kyle extremely overpowered against normal foes (bosses and special enemies are another tale).

And this time, there’s more than just stormtroopers to fight (although there aren’t any dark troopers this time). You’ll be fighting several new types of enemies, taken directly from Star Wars lore. Most of the enemies are more or less easy, apart from the bosses, AT-STs and the returning Kell dragons, who this time can be considered bosses on their own right (and it’s a good thing that there are only 2 of them in the game). There are also non-hostile NPCs scattered throughout the levels, that if killed, will bring Kyle closer to the dark side.

One of the worst parts, I think, in Dark Forces is vastly improved here: the 1st-person platforming. In fact, jumping over several platforms in Jedi Knight is no longer a chore, as the depth perception is better now and the controls more responsive.

And although the levels are bigger now, they’re no longer as complex as in Dark Forces. Personally, I rarely had problems finding my way around the levels. Although I got a bit of vertigo when looking down chasms and one of the later levels isn’t recommended for anyone who suffers from motion sickness.

And talking about level design, Jedi Knight uses entire new graphics and textures. Since the game story occurs in new locations, the designers took this as an opportunity to create original levels from a visual standpoint, but still evoking a familiar Star Wars feel. And graphically, the game looks good for the time, albeit with the characters looking awfully blocky and the textures actually decreasing in quality as the distance increases (in order to maintain the rendering and number of frames).

But returning to the villains, the Sit… sorry, the Dark Jedi are introduced in the FMV cutscenes with the main one, Jerec, played deliciously over the top by Christopher Neame, a famous TV actor from the 80s and 90s. The rest of the Seven Dark Jedi deliver adequate performances, except for Boc, who almost hit Jar Jar Binks-levels of awkwardness. Gameplay-wise, they’re all more or less easy as bosses can get (as long as you explore and use your surroundings), except for Jerec, who’s actually quite a challenge.

As a true Star Wars game, it features the legendary soundtrack by John Williams but it also features some new music themes that mesh well with the game. All the sound effects are also pretty good, including familiar ones like the weapons and the lightsaber noises. And the length of the game, with 21 levels (although 6 of them are boss battles) is actually more or less long, although the cutscenes aren’t.

The only negative aspects I can really nitpick at, is the lack of originality in the story and the fact that, depending on your actions and choices, you’ll either become a Jedi or a Sith, without the option of choosing anything else or to mix the different Force powers available. And also, if you’re good with FPSes, I recommend anything but the easy mode. But honestly, the positive points more than outweigh the negative and therefore, I highly recommend it. And you can buy it here in Steam or here in GOG.com (this last one bundled with the expansion Mysteries of the Sith).

And again I apologise for not addressing the multiplayer part of the game or the expansion. But I promise to update this review if I ever manage to play the multiplayer and to review the expansion at a later date. But at least, you can download mods, addons and other fan-made content here (it’s where I got the widescreen and HUD addons you see in my playthrough videos).

Jedi Knight had such a success that eclipsed the previous title success (so much so that it coined the series’ name!) Mostly due to being the first game that gave the players to opportunity to use the Force and to really feel like a proper Jedi (or Sith). This particular feature would later inspire other Star Wars games to use it, like The Force Unleashed, the Star Wars Battlefield series and The Old Republic series.

So, what did you think of the review (or The Last Jedi movie)? Tell me by commenting below, in our Facebook page, in our new Steam group or on our Twitter feed. In the meantime, keep on playing and may the Force be with you. Oh, and may 2018 be a great year!